Gospel tunes only part of His plans

News.com.au reports on The Voice band He Planned Us and their dismissal from the reality television show due to their gospel-only preferences in song selection. Partnered with Destiny’s Child star Kelly Rowland as their coach, the trio declared, “We really, really, really always wanna sing straight gospel and that’s the direction that we feel like we’re called to.”

During the knockout round of the competition, Rowland had to decide whether to advance them to the next round or kick them out. She ultimately chose another artist telling He Planned Us, “I will say in this industry you have to be flexible.”

The Independent covers news of a study from a joint team of American and British scientists who have discovered that exposing the brain to magnetic pulses can temporarily weaken people’s faith in God or make them less prejudiced.

Dubbed transcranial magnetic stimulation, the process has been previously used to treat depression but researchers have now found they can use it to change beliefs and views on threats and conflicts. Dr Keise Izuma, one of the study’s authors, stated, “We found that when we experimentally turned down the posterior medial frontal cortex, people were less inclined to reach for comforting religious ideas despite having been reminded of death.”

Relevant reports on U2 singer Bono’s comments about Christian music, its need for more honesty and the power of the Psalms. Speaking with David Taylor—director of Brehm Texas—the superstar reflects on why Christian music lacks the thematic concerns found in the Psalms and discusses how the Psalms “underscore the message of Jesus and his call for justice”.

The Guardian reports on the Church of England’s phenomenal 2016 return on their investments which saw the church make a 17.1 per cent return on their financial portfolio. Church commissioners explained it was partly due to the sterling’s post-Brexit weakness and also interests in private credit strategies, private equity and timberland. The church manages investable assets worth £7.9 billion.

Tagged with: Bono Church of England Kelly Rowland science The Voice U2 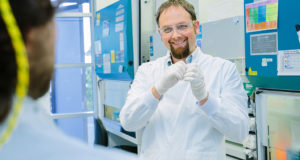 In the beginning: Unlocking the secrets of human development