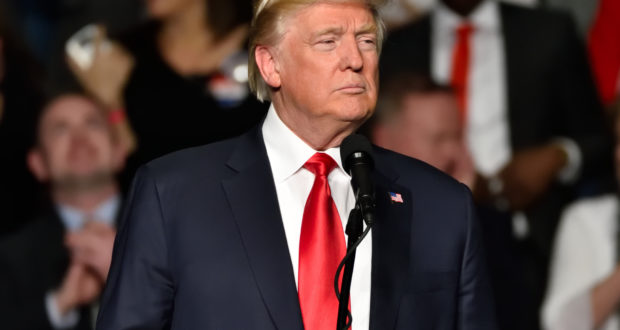 Our creator is the ultimate rights legislator

CBN News reports on President Trump’s comments at the National Prayer Breakfast where the 45th president of the United States of America declared, “Our rights are not given to us by man. Our rights come from our Creator. No matter what, no earthly force can take those rights away.”

Trump also told the audience, “Across our land, we see the splendour of God’s creation. Throughout our history, we see the story of God’s providence. And in every city and town, we see the Lord’s grace all around us, through a million acts of kindness, courage and generosity. We love God.”

The event also featured Republican congressman Steve Scalise who survived a mass shooting attempt at a baseball event in 2017. Scalise discussed God in the context of his own story surviving the shooting. “You can’t separate church from state,” said Scalise. “This idea that you could just check your faith at the door … faith is part of who you are, it’s part of who I am.”

The Christian Post reports on one Baptist pastor’s view that parents shouldn’t let their children dictate family choices around which church to attend. The reason? “Children are not yet converted into the Christian faith and thus could be led by ‘depraved’ desires”.

Pray’s Mill Baptist Church senior pastor Josh Buice says that he often encounters families who tell him that they chose a church based on what makes their children happy but this isn’t a feasible strategy for growing the faith given the rise of nonreligious people in America.

“An overwhelming percentage of youth who attend church every Sunday are in fact unconverted. Will you make your choice of church based on what your child desires, when in all reality, those desires are selfish, carnal, and not exactly God-honoring?”

Christ on the brink after removal from clink?

Christian Concern reports on news from the UK that a respected Christian volunteer chaplain has been removed from chaplaincy work at HMP Brixton prison and a Christian course has been banned by a Muslim senior chaplain.

Pastor Paul Song has been a volunteer chaplain at HMP Brixton for almost 20 years but since Imam Mohamed Yusef Ahmed took over as the senior chaplain in 2015, Song claims he was asked to stop running Christian courses and eventually barred from visiting the prison.

“Imam Mohamed’s discriminatory agenda was clear from the outset,” says Song. “He began scrutinising the material for each of our courses, commenting that the material was ‘too radical’, and that the Christian views expressed were ‘extreme’ … He also said he wanted to ‘change the Christian domination within HMP Brixton.”

Stars may glitter but they ain’t the babysitter

The Chritian Post has an opinion piece exploring the concerning trend of Christianity being hijacked by “spiritual celebritism”. Writer Chad Davidson explains the concept as “when a Christian is so enthralled by a celebrity that they feel the need for this celebrity to love Jesus, and in doing so, bring about some sort of validation in their personal faith”.

Davidson explains this “insatiable need for celebrity approval” extends to children and heavy emphasis on celebrity culture over biblical knowledge is part of Satan’s broader plans to destroy the family.

“While God has made the family unit a priority throughout Scripture, Satan has set it as one of his primary targets of attack,” says Davidson. “This should come as no surprise to us, as God’s word warns that in the end times the love of the family will be lacking.”