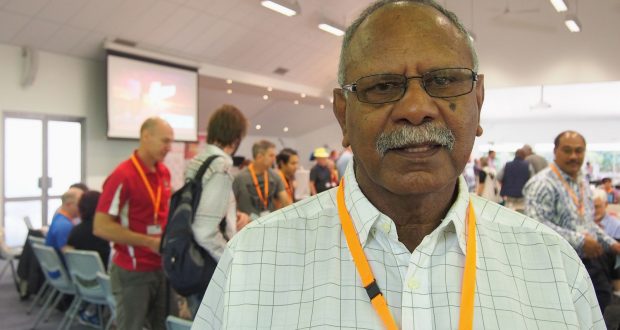 Living the covenant: room to grow in Indigenous connections

Several Aboriginal and Islander Uniting Church members told 32nd Synod members of the challenges and opportunities for the church in their communities.

Rev Dennis Corowa, chairperson of the Uniting Aboriginal and Islander Christian Congress and the Calvary Presbytery in Queensland, said the Uniting Church has a long history in supporting and encouraging Indigenous people.

He made particular reference to the 1985 inauguration of Congress, the covenant with Congress and the 12th Assembly alteration of the Preamble to the Uniting Church Constitution to recognise First Peoples.

“The covenant is the conscience between our two people’s groups,” said Dennis. “The Preamble to the Uniting Church Constitution was significant in recognition of the First Peoples in society.”

Calvary Presbytery minister John Adams said, “It’s very clear that right throughout the Uniting Church in Queensland, and further, there is a great goodwill towards Congress.”

He said the Calvary Presbytery is committed to that covenant journey with others, but does not have the resources to take up all the opportunities to work with other congregations to build relationships between First and Second Peoples.

“We would be helped, as the whole church, to have someone appointed as a covenanting officer,” he said.

He also reminded Synod members of the Assembly Mapoon Appeal to rebuild the Mapoon church and requested strong support.

Synod members heard that the community of Aurukun is in the news for all the wrong reasons. They also heard of the good work the church is doing with young people.

Ena Koongotema said, “I am from Aurukun and I’m proud of my place.”

John asked people to pray for the church in Aurukun.

“They are trying to find ways to develop unity and overcome many of the conflicts in the community.”

He also said a full-time ministry agent is needed, someone who has got the special ability to work beside people, encourage and empower local community leaders.

“It is the people themselves who hold the answers to the problems of contemporary life in places like Aurukun.”

Synod members also heard stories of unique challenges, hope and desire for relationships with other Uniting Churches from people from Zillmere, Mornington Island and Napranum.