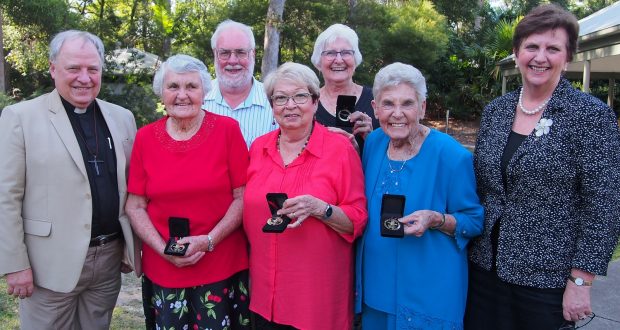 Since 1999, the Queensland Synod has recognised the outstanding and invaluable commitment of volunteers to the Uniting Church’s mission in community services through the Moderator’s Community Service Medal.

The medals are coordinated by UnitingCare Queensland and were today presented by CEO Anne Cross and moderator Rev David Baker.

“This year we received 41 notable nominations—all of which exceptionally deserving—so I’m sure you can appreciate the task of deciding upon a final shortlist of recipients proved difficult,” said Anne.

Five of the ten recipients travelled to the Sunshine Coast to receive their medals in front of the 32nd Synod members.

Barbara Russell of Proserpine has faithfully served Blue Care Respite and Lifeline in both Mackay and Proserpine for more than thirty years.

“For eleven of these years Barbara would hop in her car every Thursday and travel from Proserpine to Mackay—a 300 kilometre round trip—to undertake her volunteer commitments,” said Heather.

For the past 34 years, Neil Warburton of Cairns has donated his time and listening ear to provide short telephone support to fellow community members experiencing crisis – particularly in suicide prevention with Lifeline’s telephone crisis service in Far North Queensland

“Neil’s thoughtful and considerate nature, combined with his ability to calmly assist people in need of help is regularly drawn upon,” said Heather.

Barbara Bickhoff of Rockhampton has dedicated herself to helping others, most notably through Lifeline for more than 25 years.

Jean Sizer OAM of Toowoomba has a passion for the sick and elderly and has used this to serve others all her adult life. Jean cares with compassion, innovation and wisdom, said Heather.

“Jean has shown herself to be a woman of courage, breaking new ground by driving her own car as Toowoomba’s first Blue Nurse, being the sole medical official in remote areas of Papua New Guinea and following her retirement has spent the last 25 years as a voluntary Chaplain at St Andrews Hospital, Toowoomba.”

Mel Lambert of Moggill has actively devoted her time to volunteer as a Chaplain at the Wesley Hospital in Brisbane, predominantly in the cardiac care ward.

“Motivated by her strong faith, Mel has always taken a personal interest in her community, holding numerous positions within the church and for the past 20 years, she has been the head elder in her faith community,” said Heather.

Mel thanked UnitingCare Queensland for allowing her to be a messenger for hope and peace.

“I know each one of us has a special message to present,” she said. “May it always be a message of hope, joy and peace and I thank all of you for this privilege.

The other five recipients who were unable to attend the Synod will receive their medals at another time. They are Stella Murry of Gatton, Norel Walsh of Townsville, Daphne Kennedy of Central Queensland, Pam Dennis of Lowood and Eleanor Quaresmini of Ayr.

UnitingCare Queensland has more than 9000 dedicated individuals who volunteer through UnitingCare Community, Blue Care and UnitingCare Health hospitals – with many more volunteering through their local Uniting Church giving care and support to refugees, prisoners and other people who need support.

Moderator David Baker prayed for all of these people, thanking them for their lives of service and the way they enrich their communities. He prayed that we would all be inspired by their example.