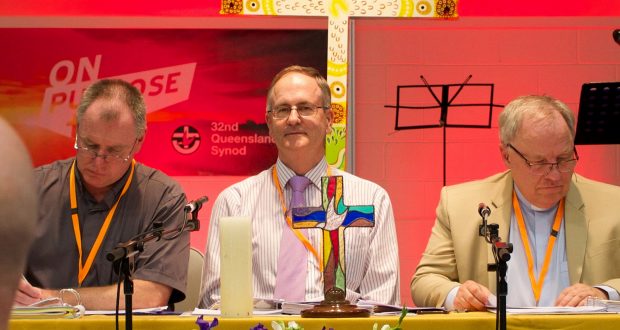 In his report to the 32nd Synod general secretary Robert Packer outlined how the church has been traveling against its Vision 2020 roadmap and identified priorities since the 31st Synod.

Robert reminded Synod members that this year is a key review point on the Vision 2020 roadmap and remarked it was, “Checking in to see how we are progressing towards our vision, to see what’s important to us now and to identify the areas for our priority for the next few years”.

“The Synod Standing Committee has been working over recent months to consider the priority areas in which the whole Uniting Church in Queensland could focus its attention. This builds upon the Together on the way, enriching community process and on the 31st Synod open spaces process.

“The Standing Committee has been exploring these priority areas from a state-wide and whole-of-church perspective, that is to say they’re trying not to confine this discussion to congregations but to explore these questions recognising that our church also includes agencies, schools, colleges and more,” Robert said. “They’re trying not to confine the discussion to the southeast corner but to recognise that we are a whole-of-Queensland church.”

Updates were provided on recent matters such as the issue of the Uniting Church Beneficiary Fund and that no resolution is anticipated until after the July federal election; the approval of UnitingCare Queensland’s updated By-laws and constitution which will be effective on 1 July 2016; and the approval of a Synod property and other delegations policy that applies particularly to UnitingCare Queensland.

During the Q&A session, Robert was asked by Gordon Gillmore about whether there was thinking beyond the 2020 date. Robert joked, “My intention is not to be general secretary in 2020.”

On a more serious note he said, “2016 is not just about what priority directions we’re doing, but it is also the opportunity to look at the 2020 vision and to look further as to what sort of church we’ll be in the ten years after that as well. The time to start it is now.”

The general secretary’s report was passed by consensus as were appointments made by Standing Committee to various boards, committees and commissions since the last Synod.