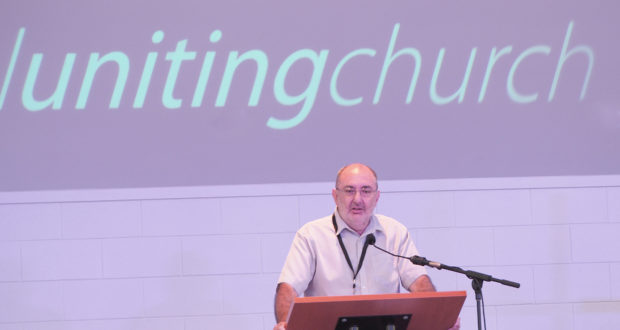 On the second full day of business at the 33rd Queensland Synod, Rev Arthur Tutin, acting presbytery minister, brought a sense of optimism for the future of life in the Central Queensland Presbytery.

Arthur spoke of the diversity of the Central Queensland Presbytery, which stretches from Gladstone to Airlie Beach and west to Longreach and south to Blackall. The land features coast, farming and coal mining.

In the last 18 months the main challenge for communities in the presbytery is severe weather, including the effects of Cyclone Debbie in April this year, mostly focused on Proserpine, Mackay, Sarina and to a lesser extent the Rockhampton region.

“After many months of watching the sky with anticipation, parts of the central west finally received some much-needed rain, enough to revive hope. But it is still difficult for everyone,” said the report.

In a video prepared for the Synod, the deep physiological and physical effects of Cyclone Debbie and the ability for local church people to support their own communities to heal was presented.

Also in the video, Wayne McHugh spoke about the inaugural Country Madness youth camp that had 52 campers and leaders earlier this year. He said the camp is an intentional discipleship event aimed at young people from Central Queensland and North Queensland.

Athur told Synod members of the major discernment process in the presbytery during 2014 and 2015 which led to appointing a remote/rural ministry project officer (Arthur) in 2016. This role is looking at future sustainability and options for churches in the presbytery.

Arthur said as he travelled around the presbytery he found exciting things already in place.

He spoke of Blackwater having what they call “a cuppa with Jesus”, rather than traditional church and Longreach and the great work done by the minister and church in drought relief and interacting with the community.

“The presbytery realises we are all in it together,” said Arthur. “One model of rural ministry does not fit us all.

“We, as a presbytery, have committed to engage in five years of intentional mission.”

Part of that includes the concept of partnerships between congregations across the presbytery and congregations releasing their minister one Sunday a year to preach at congregations who are without a ministry agent.

They are also exploring ways in which technology could be used to enrich church life, for example livestreaming of worship, online training and Bible study.

Moderator Rev David Baker prayed for Arthur and the presbytery.

The Central Queensland Presbytery report was passed by consensus.