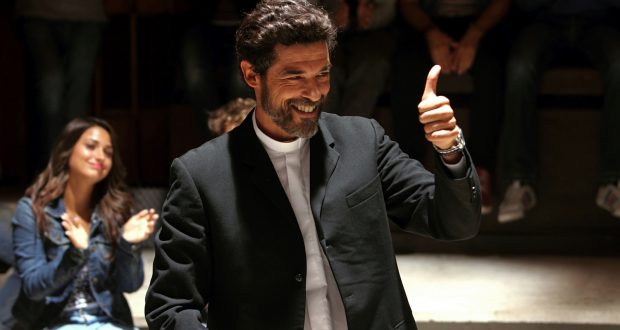 There’s a distinctly European flavour to God Willing (Se Dio vuole), the 2015 Italian comedy about love and faith which won Best New Director for writer-director Edoardo Falcone at the recent Italian Oscars. Dianne Jensen reviews this subtle commentary on the search for meaning in a post-Christian society.

The lifestyle of the dysfunctional family at the heart of this film says it all: they live in adjoining spacious apartments smack in the middle of the city and enjoy a cosmopolitan existence, albeit under the firm control of patriarch Tommaso (Marco Giallini).

This is the face of the new Europe, which has cast aside the shackles of mediaeval Christianity in favour of rationalism and self-determination. Thus Tommaso, a respected cardiac surgeon who rules both professional and family domains, is prepared to embrace the news that his son Andrea is gay.

When Andrea instead announces that the new man in his life is Jesus—and that he intends to become a priest—Tommaso is shocked to the core.

In one of those handy theatrical contrivances which throws opposites together, Tommaso finds himself beholden to the charismatic priest Don Pietro (Alessandro Gassman) whom he accuses of brain-washing his son.

As the two toil together renovating an old church, Tommaso finds a grudging respect for the priest and his faith.

At the same time, Tommaso’s family begins to unravel as longstanding tensions surface. Their rebellion is another blow to the careful construct of his life.

There are no superheroes or miracles in this story, merely the revelation that a life lived without wonder is a life devoid of joy. The reformed criminal/priest is no more and no less than a man for whom God has become the alpha and omega of all he does.

God Willing is both witty and tender in its exploration of faith and the desires of the human heart. There are obvious parallels between Tommaso’s iconoclastic intolerance of all religious belief, and the despotism once welded by the Catholic Church in Italy—yet the story delivers its key message with disarming simplicity.

We may speak in the tongues of men or of angels, but without love it’s all just a lot of noise.