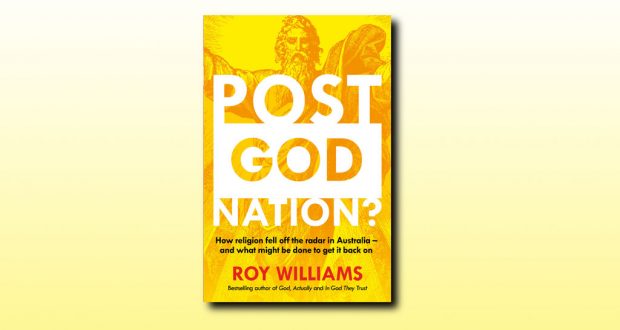 Australia could be reasonably described as a post-Christian nation, and Roy Williams’ Post-God Nation tackles the issue of faith in our current society head-on. Dr James Page reviews.

Apologetics is an established theological genre, traditionally involving the defence of Christianity against pagan beliefs.

Roy Williams and his book Post-God Nation stands in this historic tradition, although, in this case, Williams is defending Christianity against some of the attacks by the more radical secularists of our time.

Williams argues in the first part of the book that much of what is positive about Australia, such as our notions of justice and respect for individual rights, stems from Christian origins. In the second part of the book he deals more specifically with the challenges of secularism.

Williams is also prepared to be critical of churches. For instance, he argues that churches need to be more outspoken on issues of peace and social justice, and indeed he suggests that failure to do so in the past is one of the reasons for the decline of institutional Christianity.

One of the weaknesses in the book is that Williams fails to engage more on important theological issues, such as the task of interpreting Christian truths within a modern idiom.

It would seem obvious that this is central to why institutional Christianity is monumentally irrelevant to the majority of people.

The other weakness of the book is that Williams seems to be, at times, arguing for a back-to-the-future return to civic religion, that is, a time when religion and religious belief is assumed and culturally acceptable.

For instance, if we are speaking of a post-God nation, then this subtly implies that we ought to be working towards returning to a God-nation, whatever that might be.

For all those weaknesses, this book is an ambitious and valuable foray into the public role of religion in Australia.

Dr James Page holds a PhD in peace education and has taught extensively in Australia and overseas.