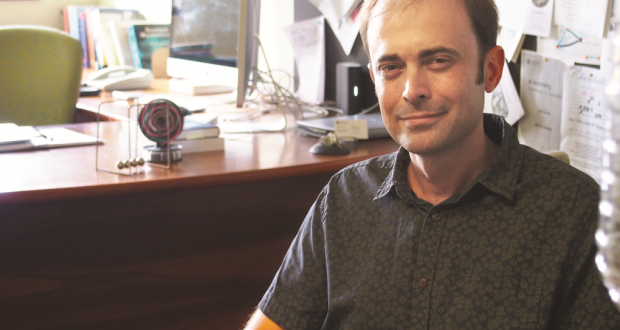 A quantum leap of faith

If there’s one principle that religion and quantum physics agree on, it’s that the search for truth requires an open mind. Physicist Dr Joel Corney talks to Dianne Jensen.

Consider this: The only thing we can be sure about is that uncertainty is fundamental to the universe.

University of Queensland (UQ) Senior Lecturer in Physics Dr Joel Corney is a researcher in the strange world of quantum physics, a discipline in which matter and energy are observed at nanoscale (really, really tiny) levels. His work is in the area of ultracold atoms and optics, exploring the behaviours of particles at temperatures as close as possible to absolute zero.

It’s a zone where science and philosophy intersect; where the laws of physics reveal seemingly random activity and curious minds can only imagine what binds creation together.

Joel is a member of Sherwood Uniting Church in Brisbane, and a Christian who views both physics and faith as integral to his search to understand what makes life tick.

“The two worlds don’t compete and they are addressing very different aspects of human experience,” says Joel. “Scientific knowledge is provisional and it is empirical, and it is kind of self-limiting in that it narrows down the questions to those to which it can provide answers. In scientific explanations God doesn’t appear because that is just not the kind of questions you are asking.”

The disciplines of science and theology do overlap, he adds, but not in ways that people might expect.

“The search for beauty—for symmetry and simplicity—is one of the things that physicists and mathematicians talk about, and that connects with the experience of faith. In the mess of equations, if you can see beyond the mess to the unifying simplicity, that’s beauty.

“Looking for patterns is for me one of the links between scientists and theologians; looking for order that isn’t quite obvious from a shallow first glance—you have to dig a bit and then you find it.”

As tempting as it may be to use the concept of God to fill the gaps in human knowledge, Joel suggests that doing so limits our understanding of God, and leaves us high and dry when science forges ahead.

“You have to be careful not to try and fuse together theology and science; they are both provisional but if you fuse them together a scientific theory might move on, and the theology that went with it is divorced and you need to reinvent it.”

The disconnect between the fundamentalist theology of his childhood and his growing fascination with science forced Joel to question his faith during his teenage years.

“I grew up attending small congregations in the Pentecostal tradition where my dad was a pastor for a time. I became increasingly uncomfortable with the fundamentalist approach to science and things like evolution and the age of the universe … by the time I left high school for university I was ready to look for other solutions.”

Living at Cromwell College on the University of Queensland campus opened up a different way of looking at things.

“I was introduced to the Uniting Church, and the idea that you could be a faithful Christian and still respect scripture and yet not have a literal view of it. You could accept fairly mainstream scientific things like evolution and the Big Bang creating the universe.”

Joel read the Basis of Union and encountered a Christ-centred approach which gave him the freedom to engage intellectually with his faith.

“The Basis gave a very unified view of what Christianity was about—we read the Bible with Christ in view. When I read that and learnt about what that meant, I felt that even with all my years of growing up in the church I hadn’t seen the Christ-centred focus and deliberation that comes with that. Maybe it is a transition that many of us need, regardless of what church we grow up in—our Sunday School understanding has to be questioned, modified or even rejected in order to fully grasp faith as an adult.”

A faith to live by

Now at 40 years of age, with a wife and three children, Joel is involved in his local congregation as well as being increasingly concerned with a range of social justice issues.

“My Christian faith informs my political views. If we look for a translation of the New Testament witness in the political sphere then we need to be thinking about a more equal society where there aren’t huge gaps between rich and poor … that is in a sense a prophetic tradition that the Uniting Church has taken up.

“The other big issue is our environment and what we are doing to it; I think the church is becoming more aware of that and it is a place where faith is pushing Christians to be more proactive.”

As a member of Gen X, Joel knows that he and his Christian peers are going against the tide by attending a traditional mainstream church or even committing to organised religion. He’s not bothered by the generation gap.

“I look for good preaching and a sense of order; I don’t know if this is the scientific side of me coming out but I like a sense of order coming through—maybe this is partly my personal reaction against my Pentecostal and charismatic upbringing. I like to be challenged and made to think about my faith but I also value fidelity; fidelity to the essential gospel is important.”

This same willingness to balance established theory and revelation is also a requirement in the world of quantum physics, where pat solutions don’t apply.

“One of the central aspects that you can’t get away from is uncertainty, and in quantum physics there is an irreducible uncertainty which is philosophically quite different to the more classical notions that in principle everything could be knowable, or if things were unknown it was because we didn’t measure them precisely enough,” says Joel.

In simple terms, when you observe how matter behaves at the nanoscale, the laws that govern larger objects go out the window—and nobody really knows why. For example, matter can go from one spot to another without appearing in the intervening space, and what we do in one part of the universe can instantly affect what is seen in a different part (described as “spooky action at a distance”).

In order to make sense of these apparent contradictions, the quest is on to find “the theory of everything”.

“The theory of everything is a search for an overriding theory that somehow unifies incompatible theories, but it is a bit like a mirage—it is currently far out of the range of what we can test experimentally so it remains in the realm of metaphysics and speculation,” says Joel.

There’s a natural congruence between physics and faith and the third passion in his life, music.

“The patterns in classical music really appeal to me and that resonates with my goal as a research scientist and also the Christian believer—seeing the bigger pattern that ties things together.

“I am driven by curiosity and that translates into passion. I am a fairly quiet and reserved person, but I couldn’t imagine living without music and faith and physics.”