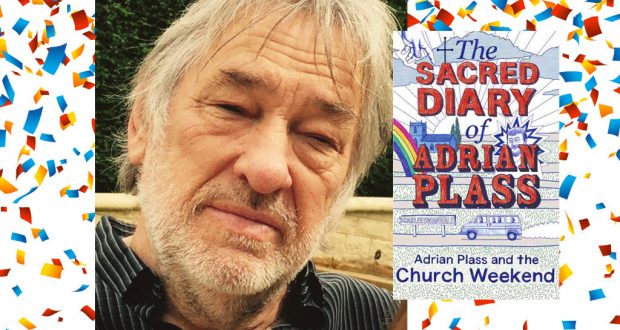 At the tail end of a two-month speaking tour of Australia, Ashley Thompson catches up with British author and poet Adrian Plass to reflect on his last 29 years of unintended ministry.

It’s been almost 30 years since Adrian Plass broke through the silence of church niceties with brutal, hilarious honesty. Bracing for “evangelicals with pitchforks” upon the release of his 1987 fiction bestseller The Sacred Diary of Adrian Plass Aged 37¾, Adrian never anticipated the side-splitting laughter and warm embrace of Christians worldwide as they recognised themselves and others in his satirical commentary on Christian life.

Encircled by fans, Adrian and his wife Bridget (not to be mistaken for the fictional Anne in The Sacred Diary series) were back in Queensland last month sharing stories and fiery gems to a packed Redcliffe Uniting Church, north of Brisbane.

“I think principles are the devil for Christians,” Adrian told the audience, referring to tradition for tradition’s sake.

“We get caught up in this Christian world where we use phrases we don’t even know the meaning of and say things we can’t possibly understand.”

“People want the food, not the recipe,” addes Bridget, suggesting we get caught up in the theology of Christianity and forget to live it out.

Together they affectionately challenge the religious conventions of church, championing an honesty about
the messiness of life that has Christians worldwide echoing “me too”.

Adrian shared an ordinary but powerful revelation that struck a chord with this Christian community: “God is nice … and he likes me.”

The return of this more childlike faith came off the back of a stress illness caused by disillusionment with the institution of church and work as a residential child care worker with disadvantaged children. It was this period of time in the mid-1980s that inspired Adrian to pick up a pen and write as a form of therapy.

“When I wrote The Sacred Diary of Adrian Plass, I wasn’t trying to change the world, I was trying to express how I felt,” Adrian told Andrew Demack.

“I thought of God as a cross between a bank manager and a headmaster. But he changed, or rather I changed, and perceived him to be someone gentler, someone who must be as nice as the most sympathetic person I know … my mother for instance.”

In an interview with John Cleary on ABC local radio’s Sunday Nights midway through his 2016 Australian speaking tour, Adrian reflected on how he and Bridget have become an informal source of pastoral care to many Christians “suffering under the ‘big D’ ”.

“I’m afraid we deal with many people who are suffering under the ‘big D’: disappointment with God, with the church, with their own lives,” Adrian told John Cleary.

“In the hearts of many long-term, disappointed Christians, I think many of them are saying ‘I want to meet my Daddy and I want him to tell me he loves me,’ ” stated Adrian, relating it to the “explosive encounter” between father and son in the Biblical parable of the Prodigal’s Son.

“That’s the passion in me to try and help that.”

Adrian’s satirical and at times black humour has cemented him as one of the few widely celebrated Christian comedians.

“I think humour is regarded as a poor relative of serious ministry,” says Adrian. “But it is phenomenal how it can explode tense situations and give people a new perspective.”

“Back in the mid-80s when I wrote The Sacred Diary nobody in England knew what to laugh at—what was sacred, what wasn’t and it was a great relaxation I think for people who I never thought it would be.”

To date, Adrian Plass has written 42 books including The Growing Up Pains of Adrian Plass (1994), Bacon Sandwiches & Salvation (2007) and Seriously Funny 1 and 2 (2010 and 2012), among the six books that make up the The Sacred Diary series—stumbling unexpectedly into fame.

“Usually people writing Christian books are striving very hard to make them worthy,” says Adrian reflecting on the success of The Sacred Diary series, which has sold over a million copies.

“Well mine wasn’t at all worthy, it was just truthful and I think the truth really does set you free when you face it.”

The foreword for his latest book, The Sacred Diary of Adrian Plass: Adrian Plass and the Church Weekend (2013) sees him reflecting back on the evolution of the series.

“I used to think I would never write a funnier book than the first Sacred Diary—precisely because I was unlikely to experience such profound unhappiness again,” writes Adrian.

“I am very far from being as unhappy as I was in those days, but the truth is that I find life, work, the church and God much funnier and at the same time much more serious than ever before. Perhaps I have grown up a bit, and so, inevitably, has the Adrian of the Diary.

“If there is a God, and it looks increasingly as though that may be the case, we have to face … he is not looking for wonderful Christians, but for inadequate followers with a willingness to be obedient.”

This is a great relief to human kind (which includes Christians).

Frank and perceptive honesty is what readers worldwide have grown to love in Adrian Plass, yet he rejects the “culture of worship we have of individuals in the church”.

His advice to pastors looking to connect honestly with their congregation is a willingness to “be vulnerable and change shape” while maintaining a strong core.

“What I can’t stand are pastors who will not acknowledge weakness and failure in people in their churches. There is a sort of neurotic optimism in the church that does us no good at all,” says Adrian.

“Someone said to me once when you counsel people you have to keep one foot on the bank and one in the ditch, and I think that is the leaders’ perspective: to be steady so that people can rely on you but be down there with them as well.”

And his advice for budding Christian authors?

“Write out of your passion and tell the truth.

“If you look into yourself, into your own heart, you will see what you really think and find some amazingly original material.”

Listen to the podcast of Adrian and Bridget Plass speaking at Redcliffe Uniting Church via redcliffe.unitingchurch.org.au

Learn more at adrianplass.com, purchase his books on amazon.com or borrow them at library.trinity.com.au