Home > Features > Behind the Basis: where it all began 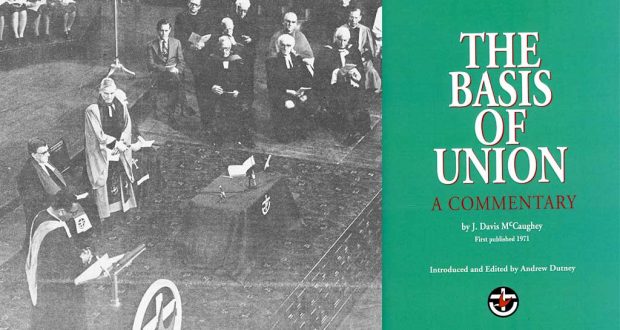 The first Uniting Church service in Sydney back in 1977. Photo: Supplied

The Basis of Union is the foundational document that provides the Uniting Church its renewal and encouragement but how much do we really know about its origins and its evolution from the fifties to the seventies? Rev Dr D’Arcy Wood delves deep into the Basis of Union’s past.

The early decades of the 20th century saw rapid developments in ecumenical activity. In 1910 an international conference on world mission in Edinburgh sparked off cooperative ventures in what were called, in those days, “mission fields”.

In the 1920s two more international bodies, Life and Work and Faith and Order, were born. These combined to form the World Council of Churches which was inaugurated in 1948.

The same three churches in Canada held a vote for union, also in the 1920s, and this was successful. The United Church of Canada was born. A sizeable minority of Presbyterians stayed out of the union, a similar story as happened in Australia in the 1970s.

In the 1950s the three denominations in Australia agreed to negotiate with a view to church union. The Joint Commission on Church Union (JCCU), with seven representatives from each church, began work in 1957.

A major difference of opinion soon appeared. Some representatives wanted a quick negotiation leading to a short “basis of union” on which all members of the three churches could vote. A different opinion, which eventually prevailed, was to study the basics of the Christian faith in Scripture and the early church. This project resulted in a booklet of 46 pages, in small print, called The Faith of the Church. It was published in 1959 and has been reprinted several times. It sets out how church union is one aspect of the renewal of the church.

The booklet was studied and discussed throughout Australia. Meanwhile the JCCU went on to produce a second report called The Church: its Nature, Function and Ordering (1963), to which was attached the first attempt at a Basis of Union.

Debate on this document focused mainly on two issues. The first was the introduction of a three-fold ministry (familiar to Anglicans and Roman Catholics) consisting of bishops, presbyters and deacons.

The second issue was a concordat with the fairly-new Church of South India. The concordat was defined as “a covenantal relationship between two churches with different constitutions, yet one in mission, with agreement in faith and order and a membership and ministry recognised and interchangeable”.

Later in the document it says, “Bishops and presbyters of the Church of South India shall be requested to share with presbyters from the uniting Churches in the inaugural service in consecrating to their office the first bishops of the Uniting Church”.

The two proposals, for the concordat and for bishops, were vigorously debated at local, regional and national levels of the negotiating churches. Written responses, from individuals, groups and councils, were gathered over a period of several years. The overall picture was fairly clear: the majority of respondents did not favour either the concordat or the introduction of bishops.

But it was also clear that the churches wanted their representatives to press on with a revised Basis of Union. There was real momentum for change at this time: new ventures in mission, a more international outlook, dialogue between churches and ecumenical projects locally. Christian unity was part of that whole picture.

The JCCU resumed its work in 1968. A new Basis was drafted, largely by Rev Dr Davis McCaughey who was to become the first president of the Uniting Church in Australia. Every sentence of his draft was carefully discussed and not many sentences were left untouched.

In the revised Basis of 1970, and a further revision of 1971, bishops disappeared; presbyters became “Ministers of the Word”; lay preachers were added; deaconesses were re-affirmed but the introduction of a “renewed diaconate” was postponed. The place of elders, embedded in the 1963 report, was retained in the subsequent drafts.

An important provision was one that allowed for constitutional change. The Basis itself is a historic document and is not changed, but paragraph 17 says that “law” (i.e. Constitution and Regulations) will be kept “under constant review”.

Such review, with resulting changes, has of course happened in the 40 years of the Uniting Church. Parish councils, not in the Basis, came and then went. The role of elders was re-defined in 1997 and, to my mind, diminished.

But the Basis lives on. It is referred to often in church councils: Assembly, Synods, presbyteries and congregations. Large conferences have been held to discuss the meaning and relevance of the Basis. It is a missionary document which calls the church to pray and work for the renewed proclamation of the Gospel, for effective service of humankind and for a wider unityof the church.

The inauguration of the Uniting Church in Sydney on 22 June 1977 was an unforgettable event. In the afternoon the appointed representatives of the three churches walked together into the Lyceum Theatre where the formal vote to establish the church was taken.

Fervent prayer was offered and a doxology sung. In the evening a celebration was held at Sydney Town Hall at which Rev Dr Philip Potter of the World Council of Churches preached. Photos of the event show how male-dominated the proceedings were. This soon began to change!