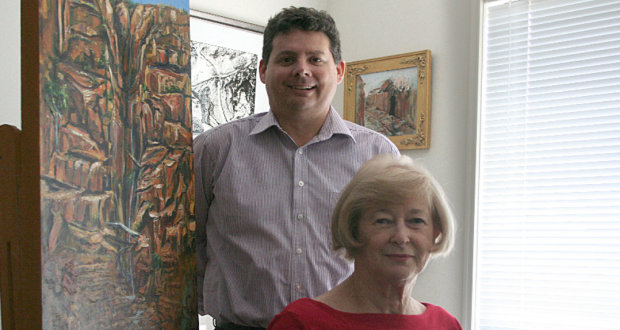 The call for humans to care for creation—to be good stewards—goes back to Adam and Eve. As the Queensland Synod marks Stewardship Sunday (5 October), Mardi Lumsden explores how the modern church is living generously.

So often, the word stewardship is underpinned by the need to fix the church roof or upgrade technology. Queensland Synod Moderator-elect Rev David Baker says stewardship arises from an understanding that humans are created to “bear witness to the presence and purpose of the creator.”

“Stewardship is the shaping of our lives (and all that we have) to reflect the purposes of the kingdom,” says David. “I know that sounds incredibly religious, but it is the question: ‘Am I exercising what I have been given to be a blessing or am I hoarding for myself and for those immediate to me, wealth which one day rust will destroy and moths will eat?’ ”

David says the biblical understanding to give ten per cent of your income to the church doesn’t quite hit the mark.

“I think we rather need to see the New Testament as speaking about a generosity of life that is way beyond ten per cent and be very careful about the idea that we give God a certain percentage and thus believe we have fulfilled all righteousness.

“The really difficult thing the vision of the kingdom lays upon us … is the responsibility to look at all that we could name as ours and ask ourselves how it is being deployed for the sake of the kingdom.”

Redcliffe Uniting Church, in Brisbane’s north east, is one community attempting to live that call. The congregation was gifted a large bequest and is in the fortunate position to focus that gift on new mission activities rather than core business. In the past few years the church has given away over $100 000.

Redcliffe Church Council Chairperson Greg Adsett says the congregation had been talking for a number of years about how they could be more sustainable and not totally reliant on gifts.

“If we begin to rely on that type of stuff then there is no challenge for people in the congregation to give,” he says. “Back in history we were given a much smaller bequest … and over the course of three or four years that money was gone.”

The congregation decided they could have used that money better so were focused on ensuring the long-term benefit of the new bequest through building the bequest itself and funding missional projects within their church, local community, the wider Uniting Church and overseas.

“We’ve always looked at it as ‘How can we be the best stewards’? Framing it in a legacy story, a good news story, really helps that,” says Greg.

“Stewardship is both time and money. I think it is using the gifts that God has given you wisely and knowing your limits and acknowledging that in various parts of your life we have varying capacities to give.”

When minister Rev Paul Clark was called to Redcliffe Uniting Church and heard about the bequest, his first response was “Oh no!”

“I know churches fight about money,” says Paul. “It is such a huge responsibility!”

He was glad that the Redcliffe congregation had made a commitment to fund new mission rather than core business.

“I’ve got a healthy parish in the first place that can pay its bills but I understand that if I was in another parish where they were struggling to pay the bills, it would be a big temptation to say, ‘we need to get afloat so we can go somewhere’.”

Paul’s experience of running stewardship campaigns in various churches has not been particularly fruitful for long-term mission.

“But when the focus is changed to mission, that changes everything. People get excited saying, ‘I want to be part of what God is doing in the world’,” he says. “People don’t give to a sinking ship. They want to give to something that is going somewhere.”

Paul says committing to fund new initiatives forces his congregation to think missionally and get out into the community. One activity is an art competition. Last year’s competition drew artists from throughout the Redcliffe community to paint depictions of stories from Genesis to Jesus. Paul says some of the artists were not from church backgrounds and it gave the church a way to connect with them and the artists a way to connect with the Bible.

The ecumenical Christmas celebration, now in its thirteenth year, runs for five days and requires a large amount of money to run, and also around 1000 volunteers.

“Around 14 per cent [of volunteers] indicate they don’t go to church, which is just amazing,” says Anne. “It obviously catches the imagination of people who aren’t Christians.

“I think they see it as helping the community … and I think it is relationships.”

The project has built strong relationships between the 60 churches involved as well as with the local council and businesses. But giving time at Christmas must be difficult for people.

“People believe in it and see the value of it as an outreach,” says Anne.

“I say to them, ‘This is an act of worship, you are giving of your life for these five days and you’re giving it to God’. As the churches come together there is an atmosphere that is created that is far more powerful than we even understand. Some of the value is not necessarily measurable. People say, ‘There’s a good feel down there’. I think they are feeling the presence of God.

“As you give there is a flow on that happens that may not directly come back to you but in terms of the kingdom of God, builds and grows. If we can capture that and the spirit of generosity and the effect that that can have, amazing things can happen.”

Along with the launch of the first Foundation fundraising campaign for many years ($10 for 10, raising money for Indigenous education) this marks the first step in a new journey for the Uniting Church in Queensland.

David Baker says it is time for the church to reflect on its mission priorities.

“The challenge for the church is the dialogue we need to have with ourselves around where are we really called to be,” he says.

“Are we going to seek our lives lived as Christian communities as lives lived for the other and in service to our community?” asks David.

“What are we called to do now, in the state we are in now, to bear fruit with all we are given?

“Are our Christian communities being structured, led and grown as communities of disciples or are they simply religious communities of like-minded people who look after themselves? That is a deep challenge for us all, but that is a question of stewardship.”

For David, the act of giving money, time or talents is an acknowledgement of faith.

“If you are going to give, give generously and with a sense of confidence that God is able to multiply a blessing in ways that we can’t imagine.”