Home > Features > Lessons drawn from the funny side 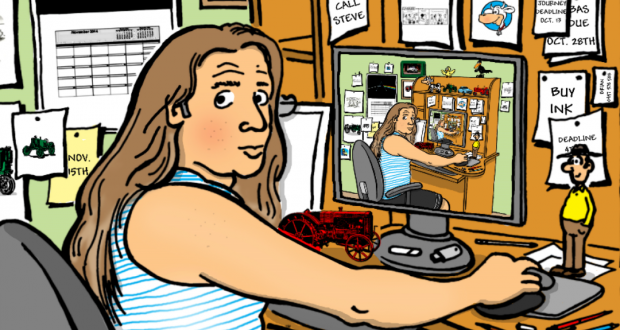 Lessons drawn from the funny side

Dianne Jensen talks to award-winning comic artist Phil Day about viewing life and faith through the lens of humour.

Remember that smart-aleck kid whose clever caricatures were passed around the classroom as soon as the teacher’s back was turned? There’s a good chance that he or she grew up to be a cartoonist like Phillip Day, the award-winning comic artist who has been contributing to Journey magazine for nearly two decades.

Phil, 51, lives at Christmas Creek, just south of Beaudesert in the south-east corner of Queensland. His work was recognised for the second year in a row at the recent National Rotary Cartoon Awards with a merit award for best cartoon on a sports theme.

Now an Elder at Beaudesert Uniting Church, Phil became a Christian in his mid-teens. In common with a lot of Uniting Church Queenslanders he met his wife Sue (and later became engaged) at youth camps at Alexandra Park. They have three adult children and are about to become grandparents for the first time.

“I always knew I wanted to be a cartoonist,” says Phil, who admits that his aptitude for comic sketching and his off-beat sense of humour were honed during his school years.

“I found myself from an early age looking for the funnier side of situations. In early high school and going into mid-high school the teachers would confiscate my drawings and keep them for themselves.”

Phil left school after year ten and went to work on the family farm. His love of rural life (one of his hobbies is restoring old tractors) inspired his first cartoon strip about a family and a cow called Maggie living on a dairy farm. Maggie has been running for 30 years in the Beaudesert Times and has been taken up by rural newspapers in Queensland and Tasmania.

With no formal training, Phil drew on his technical drawing skills and eye for the absurd to develop his distinctive laconic style. It’s no surprise that he is a fan of the late Eric Jolliffe, whose outback cartoons illustrated the stoicism of Saltbush Bill through the trials of drought, flood and the Great Depression, and of Murray Ball of Footrot Flats fame.

Reading between the lines

Although we love to laugh at the funnies, Phil suggests that the simplicity of cartoons belies their power.

“Visually cartoons can have more of an impact than what you can put into words. I’m a visual person, and I find myself drawn towards illustrations and pictures and drawings as opposed to reading a lot of text. I think sometimes the simplest little drawing can touch us in some way that four paragraphs of words just can’t.”

Cartoons also provide a unique platform for approaching subjects in a non-threatening way, he adds.

“There’s a freedom to say things or make observations that are quite confronting … cartoons tend to really push a point and for some reason we get away with it most of the time. And if it’s something a little bit closer to home or they just see themselves in that situation I think people can appreciate the humour in the cartoon.”

And like all creatives who challenge our complacency and pomposity, cartoonists view the world through another lens.

“Cartoonists see things from a different point of view,” says Phil. “I think cartoonists generally, we kind of see the absurd and tend to take the mickey out of things whereas other people obviously see it for what it is … I like the word observer. I think that’s what we really do as cartoonists.”

He adds, “I wouldn’t say I necessarily have a dark sense of humour, but I do sort of have an absurd sense of humour which I pull back from time to time.”

Consistently coming up with good ideas is a matter of simply “getting on with life” for the veteran comic artist.

“When I first started cartooning I used to sit down with a blank piece of paper and tear my hair out and try and come up with ideas, and that was totally wrong. Now I always carry a notebook with me and while I’m doing something else I will come up with a good cartoon idea, and that’s when I jot it down or try to remember it. My best ideas come at any time, you know. Even to the point of sometimes I’m drifting off to sleep and I think … that’s a good idea. I hope I remember that!”

Laughter is still the best medicine

Delving through the Journey archives, Phil’s first Between the Pews cartoon pops up in March 1997 in the new tabloid format which marked the publication’s move from a subscription base to free distribution. The single frame gag cartoon based on the vicissitudes of Reverend Jones and his congregation went on to become a Journey classic, reminding church members from across the theological spectrum that the truth is often best mediated through the lens of laughter.

The very first cartoon portrays a bemused Reverend Jones being fitted for glasses at the optometrist. He comments: “Church attendances are dropping, the elders can’t agree on anything, weekly offerings are down. And the parish secretary has just resigned—you don’t happen to have any ‘rose-coloured’ ones do you?”

Phil has since published collections of both the Between the Pews and Maggie cartoons. His current work for Journey magazine is an editorial-style cartoon relating to one of the articles or features.

His affectionate view of Christians and their foibles flows from a worldview rooted in his Christian faith.

“I think we as Christians tend to see the big picture and I think generally that comes through in everything we do … the sense that we’re loved in spite of everything.”

And while some people might be surprised that church life is such a rich source of comedic opportunities, after more than 20 years Phil Day still finds endless ways to make us laugh at ourselves.

“It’s not that I deliberately go to church and sit there and think, what can I poke fun at this week,” says Phil. “I believe humour is a gift from God as well, so I do enjoy seeing people relax in worship and one way to help them relax is a little bit of humour. We don’t always have to be so deadly serious.”

Phil’s recent Journey cartoons have been powerful additions to features such as climate change, social justice, and stewardship. Journey staff favourites include the little boy who signed up for the week of fasting because he thought it meant eating only fast food, and the loggers chatting as they eat lunch amid a desolate landscape of tree stumps: “So I said to my wife, ‘Stop putting my lunch in plastic bags, it’s no good for
the environment’.”

“Cartooning for me is extremely rewarding. I love to get feedback from readers, and really enjoy the fact that my work could make someone smile or laugh,” says Phil. “I also relish the opportunity to use cartoons to express my faith if I can. If I could possibly get a mini-parable in there, that’s great. I know it’s a gift from God and I want to share it as much as I can.” 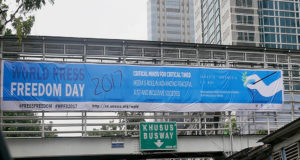 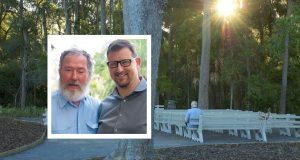