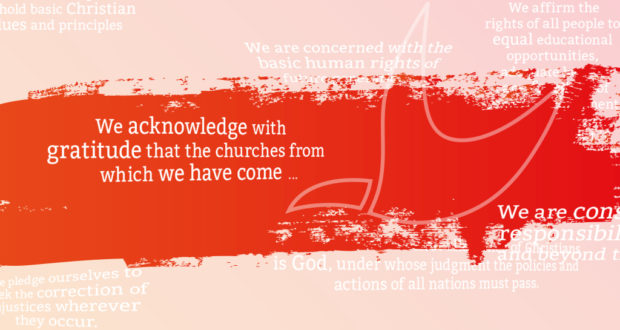 While the Basis of Union is the foundational document of the Uniting Church, another key text from 1977—the Statement to the Nation—provided a vision for how the newly formed church would respond to the Australian society in which it belonged. Rev Dr John Squires, director of education and formation at the Western Australian Synod, explores the 1977 statement and its subsequent iterations in 1988 and 2012.

The Uniting Church was formed on the foundation of a document known as the Basis of Union, which set forth our primary values and commitments and described our structure and ways of operating.

But at the same time, the first Assembly of the church, meeting in 1977, issued a Statement to the Nation which set forth our commitment to the kind of society which was described in the Bible by Paul in Galatians 3.

In this 1977 Statement to the Nation, the church declared that “our response to the Christian gospel will continue to involve us in social and national affairs”.

And so, it decreed that it was eager “to uphold basic Christian values and principles” in society. It then identified some of these values: “the importance of every human being, the need for integrity in public life, the proclamation of truth and justice, the rights for each citizen to participate in decision-making in the community, religious liberty and personal dignity, and a concern for the welfare of the whole human race.”

Accordingly, the Uniting Church pledged itself to action which would “seek the correction of injustices wherever they occur”.

The statement specifically identified “poverty and racism, equal educational opportunities, adequate health care, freedom of speech, employment or dignity in unemployment” as key areas in which it would seek “to oppose all forms of discrimination which infringe basic rights and freedoms”.

The statement also set forth a challenge to some values which were felt to be overly important in society, especially acquisitiveness and greed, as well as the daily widening gap between the rich and poor and challenges to basic human rights. These still remain pressing issues in 2017.

In a paragraph of the 1977 statement, which was certainly prophetic in its strong commitment to environmental responsibility, the Uniting Church affirmed that it “will urge the wise use of energy, the protection of the environment and the replenishment of the earth’s resources for their use and enjoyment”.

Back then, that was pioneering. Now, every denomination places ecological concerns at the heart of its faith.

So, the 1977 statement offered a bold affirmation of the right of a faith community to propose policies and lobby for actions which would further the welfare of all persons everywhere.

But one striking area of social and national policy and action is not to be found in this statement.

Curiously, whilst there is a reference to the reality that we live within the region of South-East Asia and the Pacific, there was no specific reference at all to the original Indigenous inhabitants of Australia—the First Peoples, those Aboriginal and Islander people who had cared for the land of this continent, the islands nearby, and the seas which surround it, for millennia.

So, in 1988, the year which commemorated the Bicentennial of the first European settlement of Australia, the Uniting Church issued a further Statement to the Nation which made explicit and detailed reference to the First Peoples.

This document was promulgated at the meeting of the 5th Triennial Assembly, which was presided over by the eminent Western Australian lawyer and churchman Sir Ronald Wilson.

This second statement included words of confession and commitment. There was a very clear confession of “the injustices that have been inflicted on those of us who were Aboriginal people” as well as a commitment to “legislative action which honours the Aboriginal plea for justice … and popular action by which the Australian people express their willingness to support Aboriginal Australians in the quest for justice and their struggle to reconstruct their society”.

Sadly, these commitments remain unfulfilled; they remain as pressing and urgent matters in our own time.

The 1988 statement went on to underline the commitments made to particular issues in the 1977 statement, including action “to work for justice and peace … challenging acquisitiveness and greed, opposing discrimination and prejudice, condemning violence and oppression, and an intention to challenge all social and political structures and all human attitudes which perpetuate and compound poverty”.

That, too, remains a matter about which we can continue to be concerned.

The 1988 statement strengthened the affirmations of the earlier document concerning the natural world as God’s creation. It affirmed that the world is “good in God’s eyes, good in itself, and good in sustaining human life”; it offered a commitment “to promote the responsible management, use and occupation of the earth by human societies … [and] to challenge all structures and attitudes which perpetuate and compound the destruction of creation”.

In 2012 young adult leaders of the Uniting Church in Australia wrote a further statement, from their generation. This statement came about as a result of time spent at the Uniting Church’s National Young Adult Leaders’ Conference (NYALC), and it developed the themes of the earlier Assembly documents.

The young adults issued a direct challenge for “our church, our government and our nation to listen deeply to the knowledge and culture of our First Peoples”.

The same statement developed the ecological concerns of the earlier documents, by noting: “we are upset at the misuse of the natural environment for greed and consumerism and the lack of compassion toward those affected” and by advocating for “investment in renewable energy and endeavouring to make responsible, ethical decisions in our day to day living”.

Their statement ended with a commitment “to work towards God’s promised goal of the reconciliation of all things by working for justice and for peace in our nation and beyond”.

In 1977 the Assembly concluded its Statement to the Nation by pledging the church “to hope and work for a nation whose goals are not guided by self-interest alone, but by concern for— the family of the One God—the God made known in Jesus of Nazareth the One who gave His life
for others”.

A similar sentiment occurs at the conclusion of the 1988 statement: “As a Christian church, born out of the struggles of Australian Christians to live in obedience to God in Australia, we find hope in Jesus Christ. We recognise that we Australian people are of diverse faiths and cultures and our desire is that we live together here in one community in justice, peace and mutual respect”.

May that still be the case for the Uniting church in Australia in 2017.