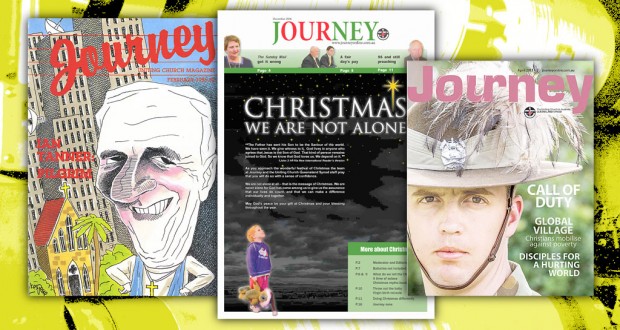 A few of our favourite covers: Journey’s first edition (February 1986); Christmas cover (December 2006); and our most recent award-winning cover (April 2013).

This edition marks 30 years of Journey magazine. Mardi Lumsden explores the past, present and future of church communications.

Leafing through newsprint is a fast-disappearing luxury. The dusty 30-year-old pages of the Journey archives are filled with stories of the church at work in the world, calling out injustice and celebrating global, national and local milestones.

This is a record of the difficult conversations the church is willing to have about its purpose and voice in the world. The masthead itself is a constant reminder that the Uniting Church is on a journey towards a promised goal; always moving forward, always uniting.

As we look back on 30 years we are reminded that the purpose of Journey has not changed, but the format continues to evolve as we look to the future.

In February 1986 a new magazine emerged for a relatively new church. The previous publication Life and Times was reshaped into Journey. Then-executive editor and manager of the Communications Services Unit Dr John Harrison says the change was significant.

“Life and Times was based on the ‘reporting the church to the church’ model, whereas Journey was designed to be evangelical in the best sense of that term,” says John who is now a senior lecturer in journalism and communication at the University of Queensland.

Journey was intended to be the kind of thing a church member or elder could take with them when visiting people on the edges of their congregation. That purpose remains to this day.

Today Journey is delivered to Uniting Church congregations across Queensland and shared throughout the church’s agencies, making its audience broad and varied. Two out of the three largest subscribers to Journey are the Wesley Hospital and St Andrews War Memorial Hospital, both in Brisbane, where staff and patients read the magazine. But as John says, the magazine is just the start of a conversation.

“Its intention was to be an adjunct to the sharing of faith and faith stories,” says John. “That is the link between a small synod publication like Journey and the great mission of the church.”

“In the midst of being assailed by messages day-in and day-out, Journey—all its media platforms—is that inspiring, sometimes provocative voice of the church that comes from the hope and confidence in the gospel.

“It is a space where we can speak and listen to each other, and that is critical if we are to grow in understanding the height and depth, the breadth and length of the love of God for all creation in Christ Jesus.”

For those involved in producing this publication over the years (through natural disasters and Synod meetings), the sense of vocation has been paramount. In true Uniting Church style the magazine is a collaborative effort between the editor, writers, graphic and web designers, printers and volunteer proof readers and envelope fillers.

Looking forward, John points out that the church needs to empower young communicators in this vocation.

“We would get a lot better value from our communication work, both in mainstream media and in the religious press, if we were more attentive to fostering young people in our faith tradition in exercising their communication gifts,” he says.

Since its beginning Journey has made a point of exploring issues of justice and has been a conduit for the church to have difficult but respectful conversations. In the process the magazine and its staff have won 17 Australasian Religious Press awards.

During his time as editor, John was particularly proud of a church publication covering news in a way other publications weren’t.

“I was the editor of Journey during the Fitzgerald Inquiry and that was an interesting one to navigate. One of our proudest moments was the Journey cover in 1989 that says ‘Repent’.

“Overall the thing about which I was most pleased was the profile we were able to get in the media though our relationship with working journalists.

“In those days the editor of Journey was appointed by the Synod in Session,” he says. “You knew that if push came to shove, you had the authority of the Synod behind you—and the Synod could give you that authority, but it could also take it away.”

Last month saw the first meeting of a new editorial and communications advisory panel (approved by Synod Standing Committee) created to provide advice on how the magazine could cover particular issues.

He says Facebook aspires to be the dominant global media platform and YouTube will be the “uncurated raw vision” sharing everything from eye-witness accounts shot on mobile devices to the Olympic Games.

“In the immediate term these are going to be the two global platforms for distribution of content. The question is how do we connect to that?

“We always have to be resonating and interacting with our audience.”

“Journey has changed over the years and will continue to adapt in future—not that it will be radically different overnight, but the work to figure out what that change has to be has already begun,” he says.

A major consideration is the mainstream media’s move from print-first to digital-first communications.

“That’s a challenge considering our older demographic—which has a more traditional expectation of its media—but if we want to be any good at talking to people outside of our church we need to be willing to stretch ourselves a bit,” says Rohan.

“I think the current Journey is in a very good place. I’m a great fan of the current expression of Journey because I think it is true to the vision we had back in the 1980s.

“I think it reflects, as far as it is allowed to, the modern media landscape,” says John.

“It’s carrying great stories, the design is a joy to read, but one never rests on one’s laurels.”

The question around where Journey goes next is always on the minds of those producing it.

A primary consideration is how, in a digital form, Journey retains its original purpose of being a tool for evangelism and faith sharing. Or, if that is not how it is being used, perhaps its purpose needs to shift.