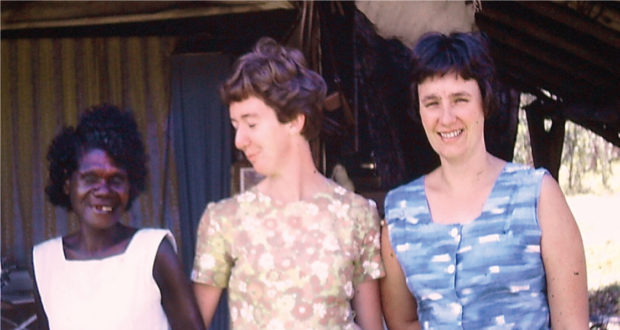 Preserving Indigenous languages through the Bible

Aboriginal and Torres Strait Islander readers are warned photographs and some names in this article may contain images/names of deceased persons which may cause sadness or distress.

The United Nations General Assembly has declared 2019 to be the International Year of Indigenous Languages to celebrate, promote and protect indigenous languages and improve the lives of those who speak them. Dr John Harrison explores the pioneering work to translate the Bible into Indigenous languages in Australia.

“Magisterial”. That’s how Cape York’s Noel Pearson describes the translations of the Bible into the Wik Mungkan and Kuku Yalanji Aboriginal languages by the Summer Institute of Linguistics (SIL).

This year is the UN International Year of Indigenous Languages and what better time to recognise the preservation of indigenous languages which has resulted from decades of Bible translation work.

The Wik Mungkan New Testament was first published in 1984 after more than two decades of translation work.

Beginning in 1961 Mabel Pamulkan, Jennifer Pootchemunka and Topsy Wolmby began working with Bible translators based at Aurukun. At that time, Aurukun was a mission station run by the Presbyterian Church. The Bible translators—Marie Godfrey, Barbara Sayers and Christine Kilham—were from the Summer Institute of Linguistics, a branch of Wycliffe Bible Translators.

Christine Kilham’s work has been a major contribution to the academic field of linguistics, in addition to her work on translating the Bible into Wik Mungkan. The Dictionary and Source Book of the Wik-Mungkan Language, which Christine co-authored with Mabel Pamulkan, Jennifer Pootchemunka and Topsy Wolmby has been fundamental to the survival of the Wik Mungkan language. Today, the Pama Language Centre offers courses in Wik for both Wik and non-Wik speakers at Aurukun.

There are some 17 Indigenous languages on Cape York. Six of these have no known speakers still living. Of the remaining 11 languages, the most widely spoken are Guugu Yimidhirr, the language of the rainforest people around Cairns (spoken at home by nearly 800 people); Kuku Yalanji, the language of the people at the former Lutheran mission at Hopevale, near Cooktown, (spoken at home by over 300 people) and Wik Mungkan (spoken at home by nearly 500 people), according to the 2016 Census.
Wik Mungkan is the most widely spoken Indigenous language on western Cape York.

Noel Pearson has said that, “other than the work undertaken by the Australian Institute of Aboriginal and Torres Strait Islander Studies in Canberra, the single most important (and more promising in terms of providing a solution to the challenge of inter-generational transmission) effort has been undertaken through the translations of the international subsidiary of the Wycliffe Bible Society, the Summer Institute of Linguistics (SIL).

“Two languages of Cape York Peninsula, Wik Mungkan and Kuku Yalanji, have been the subject of magisterial translations of the New Testament by SIL, along with a number of other languages across the country”.

Noel Pearson wrote 12 years ago about the need for a national, government funded strategy to preserve Indigenous languages. “Intergenerational transmission of a large number of Australia’s languages is declining or has ceased. This is not the result of Aboriginal Australian’s choice to abandon our culture”.

“As almost everything else in our communities, it is a result of our desperate disadvantage. Social dysfunction disables cultural and linguistic transmission,” Pearson wrote.
Wycliffe was founded in 1942 by California-born missionary-linguist William Cameron Townsend (1896–1992) who started Bible translation while a missionary in South America. In the mid-1930s Townsend began training students in the basics of linguistics and Bible translation at a summer camp in Arkansas, and thus the Summer Institute of Linguistics (SIL) was born. It is now based in Dallas, Texas.

There has been criticism of the fact that Wycliffe and SIL are part of the evangelical, if not fundamentalist, tradition of Christianity, and its operation as a “faith mission”. Much of this controversy, including criticism by anthropologists, was revisited last month (April 2019) in article by Dwight Baker in the International Bulletin of Mission Research.

The fact remains, however, that without the work of Wycliffe and SIL and their translators, Aboriginal languages such as Wik Mungkan would likely be lost.