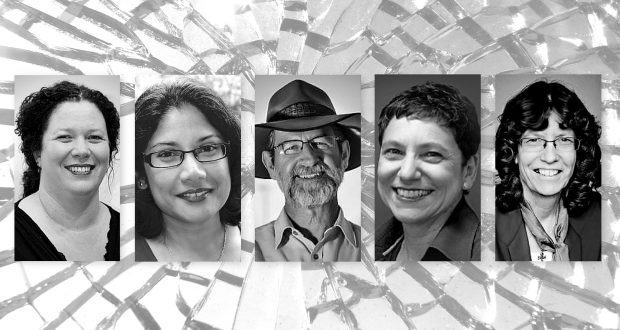 The Uniting Church in Australia may be a leading light when it comes to gender equality in leadership but we still have some way to go. Ashley Thompson talks to five key church leaders at UnitingWomen 2016 about how we can fully annihilate the glass ceiling.

Colleen Geyer is the newly appointed general secretary of the Assembly, the national body of the Uniting Church in Australia. She reminds us that the 1977 founding document the Basis of Union was formative in its celebration of “all-member ministry”.

“Everyone is created in the image of God, there’s a uniqueness about them, a preciousness of creation,” says Colleen. “And because we are equal in God’s sight, it has to be equal when you think about how we interact with each other here on earth.”

Then why did it take 30 years for the Queensland Synod to elect its first female moderator?

“I think the church is used to a particular way of being,” she says. “It’s a subconscious bias … it’s not as if we don’t have women who have the skills, abilities, gifts and expertise—we definitely do. We just have to break out of the norm to what is a new norm.”

Get out of the way

“When I got this crazy idea we should do a conference, for me the real gift was the Uniting Church’s openness to a total nobody stepping up and saying I’m really passionate about this idea—and then people either stepping up to help or getting out of the way,” says Sureka.

Demonstrate the strength of diversity

So what do women bring to leadership and why is this so important? Sureka, now associate director of church connections at UnitingWorld, offers up a two-part explanation:

“To have a good leadership team you need to have diversity in two dimensions; you need a diversity of skills and you need diversity of experience so that you don’t have an affinity group where everybody sees the world the same way,” she says.

“I think women should play their rightful role in leadership not simply because they are somehow better or different at leadership but because women’s experiences, stories and ways of looking at the world need to be a part of that discernment process.”

“Women see the world differently to men. In the same way as when I’m with the breadth of cultural diversity of the church, it opens my mind to see things I wouldn’t have seen if they hadn’t have been in the room.

“If we all viewed the world the same way we’d miss so much. So I value the way in which my sisters in leadership show me different perspectives.”

Rev Elenie Poulos is the national director of UnitingJustice Australia, the social justice arm of the Uniting Church in Australia. Growing up in the Greek Orthodox Church, Elenie says it made her angry that “there was no place for women” in leadership.

“When I discovered the Uniting Church I stayed because I found it a place where women were encouraged to be leaders,” she says.

“I think there’s a truly shared ministry between women and men, which when you see it happening inspires a kind of wholeness and flourishing—an openness to difference and conversation.”

Dr Deidre Palmer is the South Australian moderator and Assembly president-elect. Her 2018–2021 term will be the first time a female general secretary and female president have served in the Assembly at the same time.

She believes that “at times our interpretation of scripture has contributed to the inequality of women and the abuse of women”, referencing links to domestic violence.

“The Uniting Church has provided Biblical foundations that come out of the early Jesus movement that was the discipleship of equals,” says Deidre.

“So that means children and young people have a voice in our church and women and men are equal.”

Like Elenie, Sureka Goringe spent part of her youth in another denomination. Looking back, she identifies a growth period between her “conservative” and “literal understanding of the Bible” to one more “critically” engaged.

“As I grew up, and had to make sense of the real world, my theology broadened,” she says. “Because you can’t deny your experience of God, what you have to do is reform your internal thinking and fix your theology to deal with the fact that actually God loves everybody.”

Eighteen months into her new position at UnitingWorld, Sureka is starting to “get glimpses of the politics of the church”. She believes that while we have excellent processes such as “discerning how to achieve wisdom through consultation”, that doesn’t stop games from being played underneath the surface. “We are political beasts. As humans we work in certain ways: we network, we connect and there’s always going to be the way it’s written down and the way it’s actually done,” says Sureka.

“It gets tricky where women are often not invited to play those games and in fact a lot of them don’t even know those games are being played. So part of the challenge of being a woman is figuring out how people—who don’t think like you—work and how they play that game.”

Why stop at gender equality? Colleen Geyer, Deidre Palmer and Sureka Goringe highlight the need for a broader understanding of diversity within the Uniting Church. “We have a long way to go in not only seeing gender equality in leadership but also multicultural and First Peoples equality,” says Colleen.

Deidre recounts the diversity of speakers represented at UnitingWomen 2016: “We have heard from women of different cultural contexts, age groups and life experiences; people who have been working in their professional lives as social workers, teachers, politicians and educators; those who have nurtured families, loved them and created healthy spaces for them.”

“As people of the gospel it is our job to listen to and prioritise the voices of those who are not heard by mainstream society. If we don’t go and seek those people and put them at our tables then we are not living the gospel of Jesus Christ.”

The recognition of all-member ministry is an intrinsic part of the Uniting Church’s identity and constantly needs to be revisited for hidden hindrances to be brought into the clear light of day.

Whatever our shortcomings, all the leaders agree no theological barriers exist in affirming women in church leadership.

“The Uniting Church is one of the leading lights in this space because the ability for women to serve at any level of the church in any role is absolutely there,” says Assembly general secretary Colleen Geyer.

Sureka Goringe reflects, “I think we can definitely celebrate the fact we are so progressive in terms of our inclusion and affirmation of women in leadership. I’m so proud—I have friends in evangelical churches that moan about what being a woman is like in those denominations and I feel slightly smug about the Uniting Church.”

Rev Elenie Poulos acknowledges the men who have fought for gender equality.

“There are so many amazing men in our church that work against the systems and structures of patriarchy—because not only does it exclude women but it’s also not helpful for men in the context of a modern, multicultural, vibrant life.”