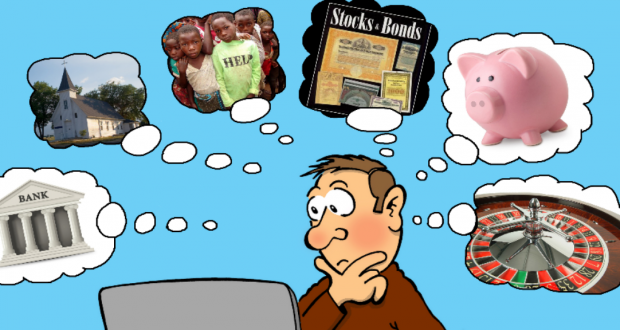 Storing up treasures for good

Investing ethically is all well and good, but the realities of it are more complex than you may think. Mardi Lumsden explores.

Prior to the last Queensland Synod meeting in May 2013 the New South Wales/Australian Capital Territory Synod in Session resolved to divest from stocks and shares in corporations engaged in the extraction of fossil fuels and to redirect their investments to renewable energy. This sparked nationwide media interest and reinvigorated a six-year discussion for the Queensland Synod around having an ethical investment policy of its own.

The Queensland Synod Finance Investment and Property (FIP) Board has drafted an ethical investment policy and is seeking feedback from Uniting Church members.

The United Nations Principles for Responsible Investment state that responsible investment is, “an approach to investment that explicitly acknowledges the relevance to the investor of environmental, social and governance (ESG) factors, and the long-term health and stability of the market as a whole”.

Ethics in a rich man’s world

Matthew says ethical investing has been a longterm conversation for the NSW/ACT Synod, with a policy in place since the late 1990s which has had continual review to reflect changing contexts. The 2014 policy reflects the fossil fuel divestment strategy that was approved by the NSW/ACT Synod last year.

“Our strategy was to look at all organisations that have a direct exposure to fossil fuel extraction and then we would implement a three-year staged divestment process.

“This process included whether the companies in question had potential offsets from income that came in from the renewables sector. We felt that the renewables sector was fairly immature in Australia and we would like to see that industry developed in some way and having a policy that encourages renewables would see some of the mining companies start to put some Research and Development into that sector.

“The complexity of the world that we live in makes framing a pure ethical investment strategy very difficult,” he says. “On one hand to be prudent and manage risk you need to invest with certain institutions and you could simply say that in Australia that means the four big banks. Once you move below that, the credit risk of investing with some funds increases.”

Despite their relatively low risk, the big four banks have their own demons. In 2009 the Uniting Church Synod of Victoria and Tasmania, along with other organisations, was part of a successful campaign to convince the ANZ Bank to stop funding companies involved in the production of cluster munitions.

Just prior to this revelation, the Queensland Synod had organised a much-needed line of credit through the ANZ bank.

“We’d done the deal before it happened. It was very inconvenient,” says Andrew. “The logical question you could leap to is would we have changed our minds [if we’d known]? Given the situation we were in at the time, possibly not.

“At the time we took a view that we don’t have any money to invest so we will put the whole of our investment strategy, which included the ethical investment policy, on the back burner.”

Andrew says it is up to investors, individuals and churches to find out exactly what and who they are investing in and if there is a mistake, to move out of that investment.

“The church’s strong sense of social justice permeates many of the financial decisions that are taken,” he says. “The view of the FIP Board is that this is subject to continuous review so nothing is locked in forever.

“We wouldn’t have crafted a policy that we couldn’t work with. We are not currently locking ourselves into any investments that are illiquid.”

According to Treasury and Investments (NSW/ACT Synod) Executive Director Neil King, the amount of investment held in a company or industry under ethical review shouldn’t be important; if a church is making an ethical stand, it can’t afford to have a cent of unethical investments.

Neil says it’s important that ethical and non-ethical investments are not compared directly to the same index.

“As soon as people see your returns, if you have benchmarked against the ASX 300, the variance, either positive or negative can be due to the fact is that you are excluding 15 to 20 per cent of the benchmark because of ethical investing. It is not a fair direct comparison.

“It creates endless debate but we bring it down to the centrality of what stewardship is. We wouldn’t want to get supernatural returns from industries we don’t ethically believe in. That is where our stewardship of the church’s money actually has to take precedence over the pure return that we get.”

It is important to manage people’s expectations, but on many measures ethical funds have been outperforming non-ethical funds in the last three years. Ethical investment of the church’s funds does not preclude responsible returns.

“Mining resources have battled over the last couple of years so the ethical investments have probably outperformed,” says Neil. “It has probably been a good play but we are not focusing on that.”

Neil says it is important to remember the intent behind an ethical investment policy.

For Andrew McBryde and the Queensland Synod FIP Board, an ethical investment policy only scratches the surface.

“It’s not just about where we put our money in order to get a cash return. It’s about how we, as the people of God in the space that we are in, actually invest everything: our lives, our talents and the money.

“The challenge from the FIP Board to the rest of the church is, OK, we’ve talked about this much; what about the rest?”

To read the Queensland Synod’s draft ethical investment policy visit bit.ly/Ul79w7
To give the FIP Board your feedback on the policy visit surveymonkey.com/s/7FVF5BS