Home > Features > When the crisis hit, our churches were there to help 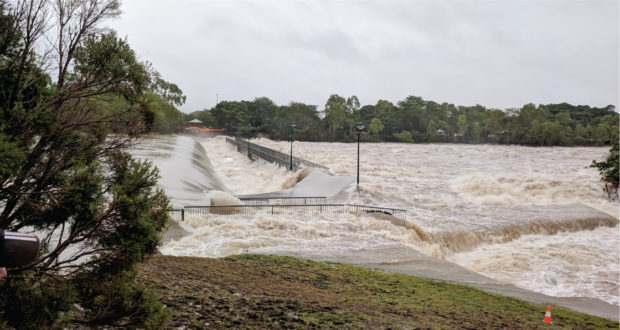 When the crisis hit, our churches were there to help

Our Journey snapshot brings together stories of how local churches responded to the unprecedented flooding in North Queensland in February.

The tropical north is no stranger to rain, but the devastation caused in North Queensland by the deluge early this year caught everyone by surprise. Local Uniting Church congregations, working hand-in-hand with council and local government and backed by the Queensland Synod Disaster Relief Appeal, did not hesitate to open their doors and their hearts to the community.

Pastor Bruce McCarthy at Wulguru Uniting Church in Townsville, where the heavy rain caused a landslip as well as flooding, says that the church was able to assist many locals in the immediate aftermath. Food vouchers from the Synod Disaster Relief Fund were given to vulnerable or isolated people, with many needing help to access recovery hubs and service providers.

The issues were often made more complex by existing disadvantage and isolation, says Bruce.

“A single mum with two little ones from Kirwan referred by Lifeline had lost clothes and linen because of mould and didn’t have anything left after replacing the kids’ clothes. I issued her with food vouchers, for which she burst into tears, and a teddy bear each for the children.”

Mt Louisa Community Church (formerly Mt Louisa House of Praise) opened their facilities as a community hub every day from 9am to 1pm. Flood-affected residents were provided with access to power for charging devices, a free wi-fi hot spot, a computer, the children’s playground and a free cuppa, biscuit and chat.

Those in need were given access to the food pantry and free goods from the op shop, and volunteers were on hand to help with grant applications and to provide personal and financial counselling.

From crisis to long-term support

Pastor Graham Huth says that the flood caught many people off guard.

“It became clear fairly early that sadly many people were not insured. Thus there were many people who lost everything in the flood. Six Aitkenvale church families had their houses inundated, with a couple requiring emergency evacuation. Only two have found permanent new homes since—the others, like a large portion of the city, are waiting for insurance and builders to repair their homes and are in temporary rentals or with family.”

Graham says that the primary area of disaster relief funding for the first few weeks was via gift cards for immediate needs, made available through the Queensland Synod Disaster Relief Appeal.

“For people with greater needs, these were assessed on a case-by-case basis with the church providing items such as beds and mattresses, as these are not something commonly available via donation through GIVIT. For more specific needs such as school uniforms and text books that could only be bought from specialty suppliers, cash funds or pre-loaded Visa cards were supplied to those who could provide some evidence to support the request.”

With the community now well in recovery mode, Graham says that the church is preparing for the next stage.

“The news is already reporting that the next wave of people seeking flood recovery assistance is coming through. As families move back into houses that have been repaired, there is now a need to source replacement furniture and furnishings. We stand ready to assist either through funding or assistance to acquire donations through GIVIT or other aid agencies.

“We are also considering strategies of going into the affected communities as people return, to welcome them home with perhaps a free meal and to discern any
other needs.”