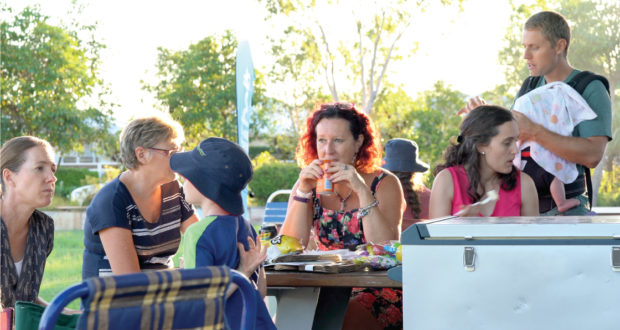 Church plants integral to the survival of the church

In the first of a series of articles looking at the projects in the Presbytery Mission Program, James O’Callaghan meets three church plants at various stages of development across Queensland.

The greatest missionary in history, St Paul, had a rather simple, two-fold strategy. First, he went into the largest city of the region (Acts 16:9,12), and second, he planted churches in each city.

While the concept of church planting is not new, church plants have never been more important as the Queensland Synod works to ensure it has a relevant presence in upcoming and growing regions throughout the state.

In March 2019 Newlife launched a church plant aimed at young adults at Albert Street Uniting Church in the Brisbane CBD with Michael Hands as lead pastor.

The idea of a youth and young adult-focused congregation first originated from a discussion with the Moderator Rev David Baker, and was brought to life through a partnership with Newlife on the Gold Coast and the Moreton Rivers and South Moreton Presbyteries.

When asked what makes Newlife Brisbane special, Michael describes a congregation outside the mainstream of church attendees.

“There have been so many people who don’t even go to church who have been part of Newlife’s inception,” he says.

“Newlife Brisbane isn’t just my idea, we believe it was God’s idea that was birthed in the Uniting Church Queensland presbyteries. We are not just a secluded community, there are so many people who have given, sacrificed and have paved the way with their leadership and vision to make Newlife Brisbane happen.”

In Highfields near Toowoomba, Rev Marius Kruger says the church plant started with a group of friends coming together to explore life.

“It was very relaxed, relevant and relational. Eventually, our group got so big that we started Sunday services.”

When asked to describe mission at Highfields, which has moved into a former bowling club now known as the Highfields Hub, Marius says it is about the community.
“We try to connect with the community outside of the four walls of the church in every possible way.”

He believes that planting churches is integral to mission.

“The core business of the Christian church, of being a disciple of Christ, is to go and make new disciples, go and share this amazing news with friends in a new way,” Marius says.

“It is about new places, with people in new ways.”

Phil Smith wears two hats as campus minister at a Roman Catholic/Uniting Church college and community pastor in the Caloundra West neighbourhood commonly known as Bellavista Estate. This is the home of a church plant known as “BELLS”, where mission is celebrated over dinner on a Sunday evening.

Phil says the church plant journey started with a sense of call that he and his wife would live in the region where 50 000 new people are expected to call home in the coming years.

“We are not going to have our own building, we are going to meet as we can and live life in this neighbourhood.”

Phil is a passionate advocate for church planting.

“The numbers clearly state that we have to plant, and we have to try new ways of planting, or we are done for,” says Phil.

“That’s not just our story, that is the story of the church in western suburban culture.”

Presbytery Minister for the Mary Burnett Presbytery Rev Chris Crause summarises the importance of church plants best when he says that if new churches are not established, we will disappear.

“Church plants are key to our future,” says Chris.

“More specifically, there are areas that are growing rapidly, and we want a presence there with ministry that reflects who we are and what we believe.”

For information about how you or your congregation can give to the mission of church planting across Queensland by supporting the Presbytery Mission program, visit ucaqld.com.au/presbyterymissionprogram or email presmission@ucaqld.com.au