Home > Local Church News > Come as you are, it’s SurfChurch! 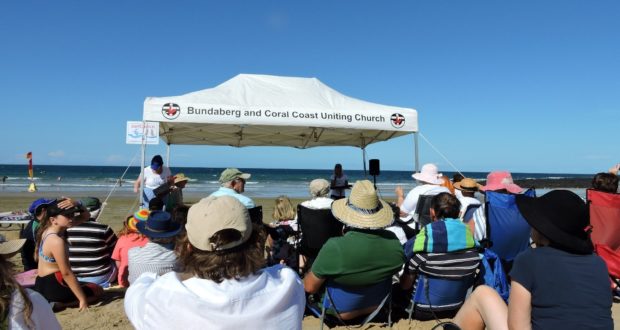 The SurfChurch crew and congregation members at Bargara beach

Come as you are, it’s SurfChurch!

Welcome to Bargara Beach and SurfChurch, where you’ll find the minister in her wet suit leading a paddle-out or preaching barefoot on the sand. Dianne Jensen reports.

Once a month the Coral Coast Uniting Church SurfChurch crew and Rev Jennifer Lynn don their T-shirts and head for Bargara Beach. They put up the church flag and set up the sound system as the congregation of between 40 and 70 beachgoers, joined by random or curious passers-by, settle on the sand ready for worship.

Jennifer is a passionate surfer who was inspired by her own experience to imagine a new church community.

Jennifer’s vision became a reality after she was called to Coral Coast Uniting Church (Bargara and Burnett Heads), thanks to the support of Mary Burnett Presbytery, Coral Coast elders and a $2000 grant from the Redcliffe Uniting Church Fund.

The first SurfChurch was held in October 2018 and a free children’s holiday program called SurfChurch Stoked offered in January and again at Easter this year. SurfChurch also hosts movie nights, featuring a surfing or ocean movie followed by discussion and food.

“I think about Jesus, in the market place, on the hillside, in a boat—teaching people, sharing with people in everyday, natural settings. Jesus brought God’s love out of the temple and into the lives of everyday people. I like to think we are doing similar,” says Jennifer.

“SurfChurch allows people to ask questions, to reflect, and to simply connect with God through a natural, everyday setting that allows space for people to engage as deeply, or as lightly, as they want. Some people build sandcastles during the service, others stare out to sea as they reflect.”

SurfChurch attenders include regulars and families and others who link into events or services such as a paddle-out ceremony.

Julie and her family have become regular attenders.

“We attend SurfChurch every month and look forward to it. This is our church, and we feel accepted here. Rev Jenny and the team are very down-to-earth and friendly. We are really grateful for SurfChurch.”

Carl is a surfer who catches up with Jennifer between waves.

“I surf with Jenny every couple of weeks and I like it that I can just paddle over and ask whatever question I have. She says no question is a silly question, so I ask lots. We all call her the surfing reverend and think that she is a good ambassador for the church because she makes it real.”