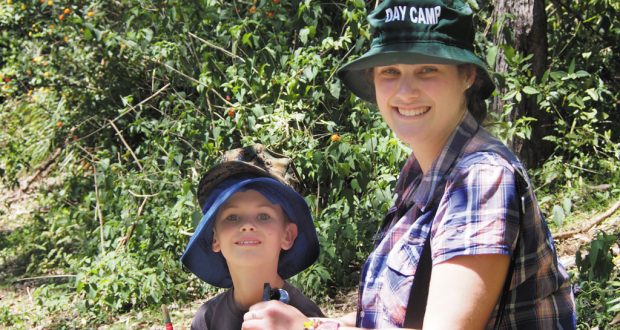 After 40 years of running day camps, it’s clear that the folk at Redlands Uniting churches just love going bush. Journey ventured down the dirt roads of a campsite south of Brisbane to find out why everyone keeps coming back.

It’s easy to see the attraction of the Karingal Scout Campsite at Mt Cotton, the site of the Redlands day camp during the September school holidays. The 120 children between grades one and eight were spread throughout the bush clearings, accompanied by team leaders and supported by church volunteers manning the activities and providing backup services.

Judging by the squeals of excitement ringing out from those on the flying fox, getting lost in a cardboard box maze or taking part in archery activities, there was plenty of popular entertainment to enjoy. When you add in chapel time, craft, cooking, sports and other activities, it is a jam-packed five-day event.

One of three camp directors and Cleveland Uniting Church youth group member Jenny Cameron-Smith has been a day-camper since grade one.

“I’ve gone from camper to leader to director,” says Jenny. “There’s a real community around it—a lot of kids come back every year and there are families that go all the way through. We’ve got one family this year with four generations involved in camp.”

Training up young leaders is a key part of the Redlands day camp model. Each group of six to seven children has a senior leader (grade 11 or older) and junior leader (grades nine or ten), with leaders-in-training from grades seven and eight.

Cleveland Uniting Church youth group member BJ tried out being a leader two years ago and liked it.

“The biggest challenge is keeping track,” he says, casting an eye over the small boys either side of him kicking their heels energetically.

“I just enjoy the whole general experience. At the end of the week you have kids who get to know you say hello every morning—it’s a nice feeling.”

Maddie, youth group member from Victoria Point Uniting Church, is in her eighth year at camp.

“I always wanted to be a leader, and that’s why I keep coming back,” she says.

“I’m not usually an outdoorsy person but day camp is fun. You really get a sense of community amongst the leaders and you’ve got a good support team behind you.”