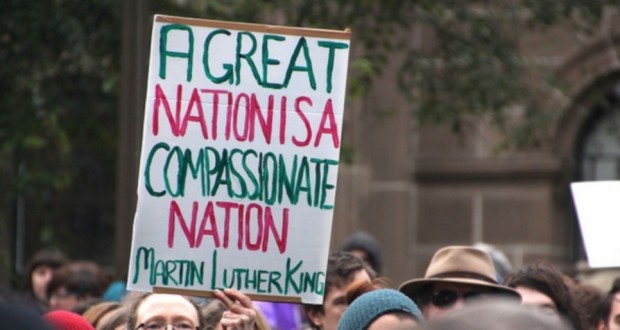 "A Great nation is a compassionate nation" Martin Luther King

The Age has reported that Indonesian officials reported that two boats of asylum seekers were intercepted by Australian naval or Customs vessels in recent days and their 20 passengers put together onto one wooden vessel and pushed back towards Indonesian waters.

The asylum boat’s crew reportedly told Indonesian navy investigators that two Australian warships put three extra people on board their boat – an Indonesian and two Albanians – before they were escorted back to Indonesian waters.

The turn-back has put further strain on the Australia-Indonesia relationship and Indonesian Foreign Minister Marty Natalegawa launched a stinging criticism of the Abbott government’s boats policy.

Dr Natalegawa said, “What Australia is doing now is clearly against and denies all comprehensive principles in dealing with the issue of asylum seekers. Australia is acting as if it can simply move the problem to its neighbour.”

Meanwhile according to Amnesty International it was announced that Australia has come to an agreement that Cambodia will take in a yet-to-be-decided number of refugees who are currently being detained on Nauru and Manus Island.

Details of the deal have not been released or any indication given about how much Australia is paying Cambodia to make this happen.

Richard Bennett, Amnesty International’s Asia-Pacific Director said, “Cambodia has only limited capacity to process asylum seeker claims and is still struggling to respect and protect the rights of its own citizens.”

Even Australia has been heavily critical of Cambodia’s current human rights abuses.

The Guardian reported that orange lifeboats used to return asylum seekers to Indonesia were stripped earlier this year of safety equipment, including ropes, scissors, knives and other emergency tools, raising further concerns about the use of the vessels, according to a customs officer involved in their deployment.

The lifeboats are designed to act as emergency vehicles and come stocked with items for crises. Guardian Australia has also reported the fuel tanks were capped to prevent any refuelling.

“They did a heap of work on those boats,” an officer said. “They stripped out everything they thought was unnecessary … the lifeboats come with an assortment of stuff, a mirror, fishing line, knives, ropes, a bucket. They stripped all that out.”

Think local, connect to the global