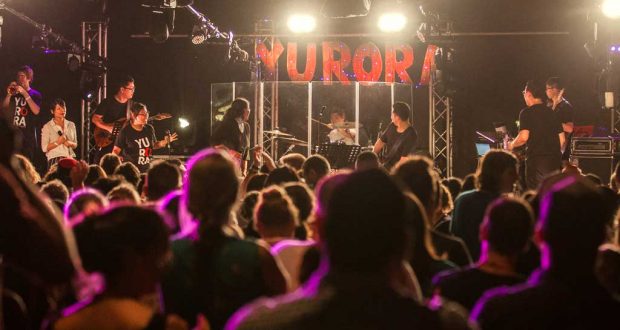 A triennial event held by the Uniting Church, the youth convention hosted delegates aged 16 to 25 from around Australia and at least six different countries worldwide.

Yurora 2017’s purpose was to excite and equip young people to be followers of God in everyday life and unite cultures with yurora, a word taken from the local Dharug people meaning “passion”.

Throughout the five days, delegates attended Bible studies and workshops covering topics as diverse as drugs to climate change, sexuality to evangelism. The creative minds engaged in workshops with the likes of poetry,
hip-hop and “serious Lego”.

Yurora 2017 director Bradon French says, “These are the things that are of interest and concern to this generation. They want to talk about it and do it in community with the people of God,” says Bradon. “They’re sick of it being sequestered away from church, they want an integrated faith that resources them.”

He says the management team was very intentional in creating an event where delegates could chose their “own adventure” and opt in to any of the 200 sessions throughout the week, thus staying true to the event’s hashtag, #MyYurora.

Diversity was present not only in the program but within the vibrant mix of cultural, linguistic and theological backgrounds. Anglo-Saxons represented fewer than 50 per cent of the delegates with over 21 international delegates attending from six countries including Sri Lanka and the Republic of Nauru.

For Shannon from the Methodist Church of Sri Lanka an important highlight was “mixing with different cultures, uniting with people from different countries”.

Similarly Slavka from the Republic of Nauru found the cross-cultural flavour of Yurora something to take back home: “I’ll be taking back to my youth the action songs that I’ve learnt, how different cultures express themselves when they sing gospel songs and how they share the
word of God.”

As the Uniting Church in Australia celebrates its 40th anniversary this year, it is exciting to witness the church lead this mission of connecting with
different communities.

Bradon French is optimistic about the direction of the church and its young people.

“We are incredibly diverse, broken and clumsy, but a generation that’s passionate about Jesus and the world,” he says.

“NCYC will continue to explore who we are as a covenanting multicultural church and it will always champion young people.”