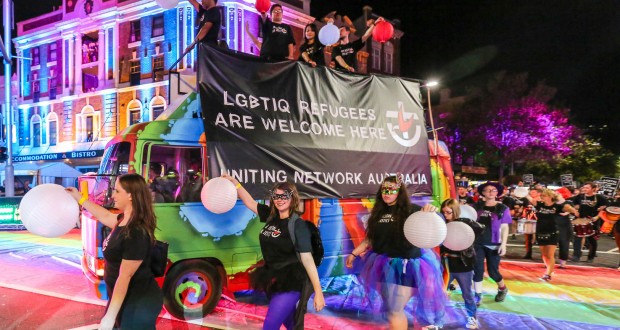 Over 100 Uniting Church members and UnitingCare employees were among the thousands of people marching at the Sydney Gay and Lesbian Mardi Gras Parade. Journey reports.

Uniting Network, a national network of lesbian, gay, bisexual, transgender, intersex and queer (LGBTIQ) members of the Uniting Church and their friends and families marched for the first time since 2003. Uniting Network’s parade entry was themed Our Passion for Justice, in support of LGBTIQ refugees. Many LGBTIQ refugees seeking sanctuary in Australia continue to face adversity—particularly in offshore detention centres in Papua New Guinea and Nauru where homosexuality is criminalised.

The Uniting Network contingent differed from many of the other floats in the parade. Instead of dancing to disco music, participants marched to the beat of a fifteen-person drumming corps. Participants wore black Uniting Church t-shirts and held lanterns as a symbolic way of bringing light to the human rights abuses occurring in detention centres.

“We see this as an opportunity to minister to the hundreds of thousands who line the streets, some of whom have been burnt by churches that reject LGBTIQ people and their families,” says Curtis Dickson, co-organiser of Uniting Network’s float.

Rev Nicole Fleming, minister with Balmain Uniting Church says, “It is wonderful to see so many people of all ages from the church—LGBTIQ and straight—participate in the float. The large number of younger people involved highlights the much-needed generation shift occurring within the Uniting Church.”

UnitingCare NSW.ACT formed a separate contingent, marching for the first time ever to show support and commitment to LGBTIQ communities and LGBTIQ residents in their aged-care facilities.

“This is an exciting first for UnitingCare NSW.ACT with close to 80 staff and supporters marching to show our support for LGBTIQ seniors who are perhaps the most vulnerable group within LGBTIQ communities,” says director of UnitingCare Ageing Steve Teulan.

Acceptance of homosexuality and same-sex marriage remain polarising issues in the Uniting Church, so the presence of Uniting Church members at the parade could be controversial. But Pitt Street Uniting Church minister Rev Dr Margaret Mayman says marching is the right thing to do.

“We are participating in the parade because sexual and gender diversity are part of God’s plan, part of the fabric of creation woven by God. Inequality and injustice are an affront to gospel values,” she says.