Home > National News > What to expect from the 15th Assembly 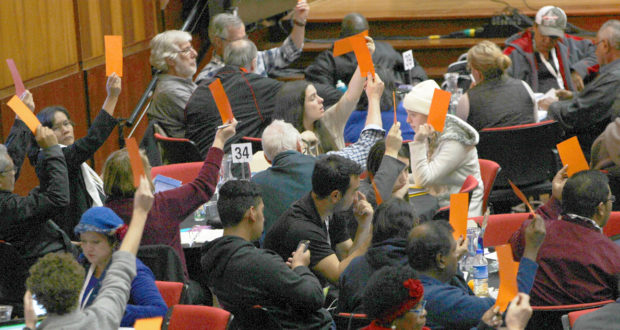 Uniting Church members from around Australia will come together in prayerful community at Box Hill Town Hall in July for the 15th Assembly meeting. Matt Pulford reports on the issues in focus for the church.

On 8 July, members of the 15th Assembly will install Dr Deidre Palmer as president, the second woman in the history of the church to hold that leadership position.

Dr Palmer will be installed as president in a service at St Michael’s Uniting Church on the first night of the Assembly meeting.

From Monday 9 July the Assembly’s 265 members drawn from across the councils of the church will decide the church’s national priorities for the next three years.

The first tranche of reports and proposals was sent to members at the end of April. They cover a dauntingly diverse set of issues.

The church’s response to the Royal Commission into Child Sexual Abuse, the challenge of domestic and family violence, our continuing conversation on Indigenous sovereignty in light of the Covenant relationship between the Uniting Church and the Uniting Aboriginal and Islander Christian Congress.

There will be a landmark statement encouraging action and advocacy on climate change and a consultation process proposed regarding voluntary assisted dying.

Assembly members will also consider a report and proposals on marriage and same-gender relationships. More reports and proposals will be published in the weeks ahead.

The big conversations aside, the week-long meeting is a festival of all things Uniting Church.

Assembly Agencies such as UnitingCare Australia, UnitingWorld, Frontier Services and other Assembly groups will have a marketplace of information stalls at the venue.

There will be two public lectures. The first hosted by the Uniting Church National History Society on 7 July from Prof Stewart Gill, Master of Queen’s College, Melbourne on “No Gods and Precious Few Heroes: Why We Need to Remember Our History.”

The Cato Lecture, a regular feature of every Assembly meeting, will be delivered on 11 July by Bishop Ken Carter of the United Methodist Church of Florida, United States.

Daily bible studies will have a Pacific flavour led by Rev Dr Sef Carroll of UnitingWorld and Rev James Bhagwan of the Methodist Church in Fiji in line with the focus on climate justice.

The worship program is being coordinated by Rev Ian Ferguson of Brunswick Uniting Church.

You can follow what’s happening in the lead-up to the Assembly on the website http://uniting.church and register for regular updates.
The 15th Assembly will be the first to attempt to go paperless. All proposals, reports and timetables will be provided to members’ mobile devices using the Crowd Compass app used for VicTas Synod meetings.

Uniting Church members will also be invited to join in 40 days of prayer before the Assembly meeting from 29 May.

Who are the members of the Assembly?

Representation at Assembly meeting is set out in the Uniting Church Constitution and Regulations.

In synod and presbytery representation and overall, the number of lay members shall not be less than the number of ministerial members.
One in 10 members must be of a “youthful age” (under 25 at the beginning of the Assembly).

For more information see Section 40 of the UCA Constitution and UCA Regulation 3.3.8.