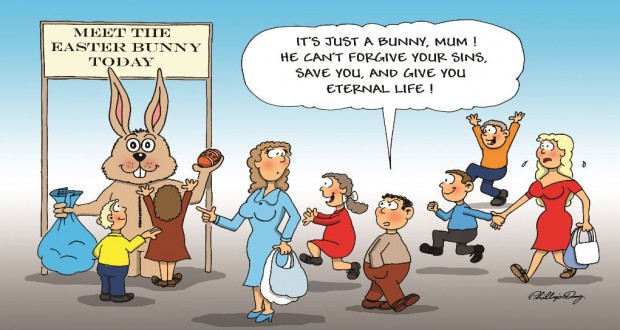 Around 1990 my New Testament professor, in referring to the encounter of Moses and the burning bush, spoke of Moses encountering “the larrikin God of the desert”. The God that Moses encountered was nothing like the gods of the empires of the ancient Near East. This God was about covenant, freedom and human society organised to a completely different economy than the established order.

The larrikin God of the desert enjoins with Moses, the wannabe, run-away, failed revolutionary leader, to have another crack, to face his failures and to go back and tell Egypt to “let God’s people go”. So the salvation story starts a new chapter.

Easter Day always reminds me of that appellation for how God reveals Godself to be in the Judeo-Christian tradition.

Easter Day is the day of a new chapter in the salvation story.

A larrikin God; a God of surprises. When John Shelby Spong asked rhetorically, “How can 21st century Christianity expect my daughter, an engineer and a helicopter pilot, to believe in a physical resurrection?” William Willimon replied, “Well, is she capable of being surprised?”

Easter Day is the day of the great surprise when, even though the disciples had been prepared for it, none had obviously believed it. Maybe when Jesus talked of it they put it with some of his more extreme teachings that will get left behind when the revolution happens!

But the revolution happened to them, and to everyone.

So nothing can now be the same; all the ways we thought the world operated have been found wanting. The securities we build for ourselves have been revealed as unjust and, eventually, futile. The way of Jesus finds a vindication that is incontrovertible.

So this larrikin God of the desert comes now to mess with our heads, just when we had things comfy and sorted.