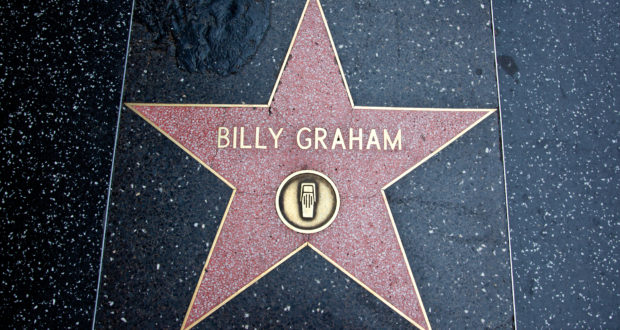 USA Today report that congressional leaders joined President Trump in praising Billy Graham as America’s pastor during a private ceremony at the U.S. Capital earlier in the week.

The president called Graham “an ambassador for Christ,” who changed America and the world.

“He ministered to all walks, from some of the greats whose statues line this very hall – Eisenhower, King, Ford and Reagan – to everyday citizens lining up to pay their respects,” Ryan said. “His message never diminished. That love was so infectious, wasn’t it? The man had such a gift for connecting with people.”

The Religion and Politics journal observes Catholicism in the Best Picture nominee at the 2018 Academy Awards, Lady Bird.

Catholicism’s presence in films goes beyond the visuals with rich theological and historical traditions that can bear grand themes like loss, redemption, mystery and grace.

A different kind of Catholic film, the story follows a young woman who calls herself Lady Bird, about to graduate from a Catholic high school in Sacramento.

In an interview promoting the movie with Terry Goss on National Public Radio, director Greta Gerwig said one of her inspirations for the film was reading about the lives of saints, especially their imperfections. “I was always interested in who they were as people and that they both were these people who were divinely inspired, but they were also kind of just annoying teenagers.

Why the date of Easter changes?

The Sun explores Easter and why one of the most important dates on the religious calendar can fall any time between March 22 and April 25.

In 2018, Easter takes place from Good Friday on March 30 until Easter Monday on April 2 – making Easter Sunday on April 1, which is also April Fool’s day.

The death of Jesus occurred around the Jewish Passover, which is traditionally held on first moon following the vernal equinox.

As the full moon can vary in each time zone, the Church said they would use the 14th day of the lunar month instead – the Paschal Full Moon – and host Easter Day on the following Sunday.

Catholicism and the catwalk

The Guardian profiles five of the Catholic Church’s best fashion moments ahead of a new show at The Met gallery in New York about the influence of Catholicism on the catwalk that proves the two have a longstanding connection.

The exhibition, which will open in May, titled Heavenly Bodies: Fashion and the Catholic Imagination will feature ecclesiastical items with designs from high end labels including Lanvin and Chanel, to demonstrate the influence of Catholicism on fashion.