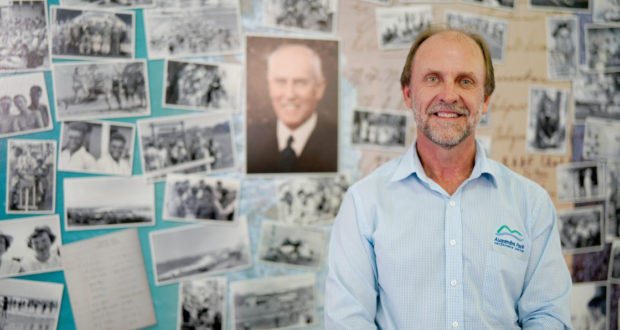 Alex Park at the heart and soul of the church

James O’Callaghan introduces the new face who will lead Alexandra Park Conference Centre through its next chapter.

A new initiative at Alex Park is a memory mural wall made up of old images from camps held over the decades and previous guest book sign-in pages.

Danny says the mural wall is a great initiative that he finds particularly special on a personal level.

“My wife’s grandparents, an aunt and an uncle are featured on the wall, on the same sign-in page as Rev John Flynn, founder of the Royal Flying Doctors Service of Australia,” he says.

“My wife also found her mother, father and more relatives on other pages of the guest book featured on the mural wall.”

When asked what he hoped to achieve at Alex Park, Danny says he wants to contribute to the overall mission of the Uniting Church in Queensland.

“We hope to continue to provide an experience at Alexandra Park Conference Centre that helps shape the lives of the people we encounter,” he says.

Danny says that after five months in the role it is clear that Alex Park is an important part of the Uniting Church in Queensland.

“We provide that positive educational and life experience to people who walk through our gates,” he says.

“I believe Alex Park is viewed by many members of the church as the heart and soul of the church in Queensland. An Alex Park experience or memory has been a rite of passage for many and I’d love to hear your Alex Park story, or help you plan your next one. Drop me an email at danny.salzke@alexpark.com.au or phone 1300 789 192.”