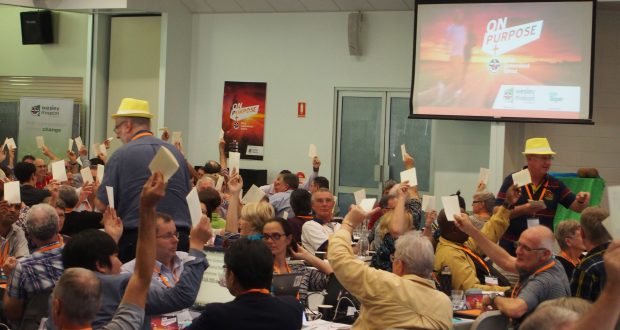 The first full day of business at the 32nd Synod was full of meaty reports and proposals.

It was noted by many that this proposal is balanced by another proposal to allow moderators to nominate in two consecutive three year terms.

There was much discussion on the issues.

Andrew McBryde reminded Synod members that by ratifying the Standing Committee’s decision to accept the Bremer Brisbane Presbytery’s nomination of the current moderator as moderator-elect was not an endorsement for one candidate over another.

“It is simply to allow this Synod to discern from three candidates rather than two,” he said.

Rev Dr David Pitman, a former two-term moderator (although not consecutive terms), said he was “disquieted by a decision to change the rules mid-point,” saying, like others, that doing so gives a certain advantage to the incumbent moderator.

Past moderator Rev Bruce Johnson said the major issue is defining the role of the moderator and how that role relates to the role of general secretary.

“Until we clarify the relationship between these two significant leadership roles we are unwise to make a decision about extending the term of a moderator,” he said.

After much discussion and testing if the decision could be reached by consensus, the Synod moved to a formal ballot.

The proposal to allow the current moderator’s nomination for moderator-elect was passed by a significant margin. Synod members will decide who will be the moderator-elect on Sunday morning.