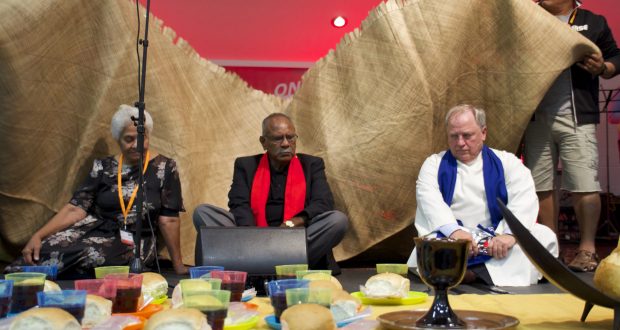 Synod starts with a purpose

The 32nd Synod meeting of the Uniting Church in Queensland began on 20 May 2016 as Rev Dennis Corowa, Uniting Aboriginal and Islander Christian Congress and Calvary Presbytery chairperson, acknowledged the traditional owners of the land at Alexandra Headland, the Gubbi Gubbi people.

“We pay our respects to elders past and present and say prayers with all those in the future,” said Dennis.

Opening worship was a celebration of the multicultural richness of the church beginning with songs from a multigenerational Tongan choir whose youngest member is two years old.

Rev Faye Talatonu explained the Samoan symbolic time of confession referred to as “sitting under the mat” as a straw mat was placed over Deaconess Terani Lima, Dennis Corowa and moderator Rev David Baker as they sat cross-legged in prayer.

During his sermon David Baker reflected on what markers show us we are on track in life, referring to the Synod theme On Purpose.

“We check our bank balance, our super balance, we check ourselves in the mirror … but which markers are true to the Gospel?” he asked.

“He said: there are some things in our nation to which I am glad to be maladjusted.

“Is not the church called to be the international association for the advancement of maladjustment?

“We may live under some benign belief that we have things under control; but who is turning our head?”

“We are doing terrible things to people as a nation to tell other people that they shouldn’t have a go. That is not the way of the kingdom.

“We must know our markers. We must attend and critique them. But we must know who is turning our head,” David said.

Patrol minister Rev John Case shared the prayers of the people and led the Lord’s Prayer with members praying in many languages.

The worship band was joined by the Korean, Tongan and a South Sudanese choir to close the opening worship.

The congregation stood to sing with voices from many cultures and many experiences but with one faith: “How great is our God”.

“Being a multicultural church is not so much about cultural diversity as it is about being so close with Christians of other cultures,” said David Baker during his sermon. “We are all better able to question our cultural assumptions and put them under the light of the gospel. We’re a better church, not simply a more colourful one.”

As Synod members prepare for the next four days of discernment and business they do so having experienced a glimpse of what can be created through diversity.