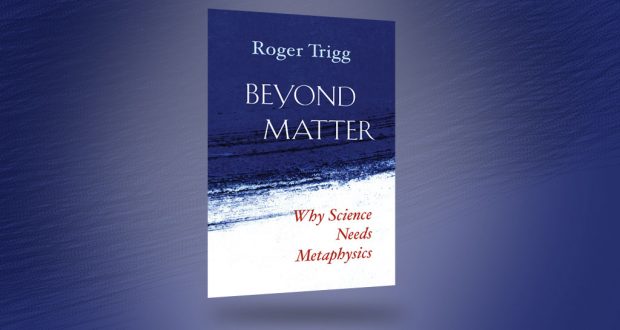 Science may not hold all the answers about the universe and ourselves but does it need metaphysics and philosophy? Roger Trigg’s Beyond Matter grapples with science, scientism and metaphysics while examining the big questions around purpose and design. Nick Mattiske reviews.

Science has shaped our modern world, therefore our atheist friends tend to think it can explain everything, eliminating the need for metaphysical explanations.

This is itself a metaphysical assumption, as many—including philosopher of science Roger Trigg—have noted, and science actually needs a metaphysical framework, both to prompt further enquiry and ensure scientists are not staking claims beyond their turf.

Beyond Matter is a response to the claims often made by scientists that questions beyond the reach of science are not worth asking and are only “pseudo problems”. Trigg tries to take a middle path, as the book is also a response to postmodernist claims that scientific truth is merely relative—only agreement rather than a fundamental aspect of our world. Though rightly made, Trigg perhaps over-emphasises this point, as those of a postmodernist persuasion don’t generally think of science as unworkable in non-Western cultures.

Postmodernists are however sceptical of the claims of disinterest amongst scientists that often cover up personal (or cultural) ambition and particular agenda. Still, Trigg is right to make the point that within scientific practice there is an emphasis on reason, which should cross cultural borders. Planes fly and fridges chill in both the East and the West. As Trigg, says, science works, and it works universally.

There is some irony in this. Atheistic science enthusiasts often pit religion against reason, and yet reason in Western science can be seen as a legacy of Christianity. The early Christians were quite sceptical of superstition, and their faith was built not on a kind of magical belief but on the belief that Jesus’ resurrection had been verified. The superstitions of the Middle Ages, it can be argued, were contrary, not sympathetic, to Christian belief.

The Enlightenment philosophers might not have all been devout, and some not even deists, but their faith in reason was a legacy of the belief, deeply embedded in Western culture and prompted by the Bible’s revelation of God, that creation was logical, understandable and testable. Thus the laws of nature, products of God’s benevolence, are predictable due to their consistency. As Trigg points out, this is not simply fact but a metaphysical position.

The modern era has of course thrown a spanner into this machinery with the discovery of quantum physics, which seems to have a certain unpredictability built-in. And now, says Trigg, science—at least in the realm of physics, currently touted as the base upon which all science needs to be built—has made a turn from the pragmatic approach of testing and observation to the speculation of mathematical theorising.

The distinction between abstract theory and testability is not quite as neat as Trigg makes out. Mathematical modelling could be said to be both theory and a manner of verification. For example, when a dinosaur skeleton is reconstructed, is it theory or practice?

But Trigg is right to be wary of multiverse explanations. The theory of multiverses, even where it is suggested that there are an infinite number of universes and so anything is not only theoretically possible but actually existent, doesn’t really answer the question of ‘why’, particularly why there is something rather than nothing.

This may be just a case of asking the wrong question, but I suspect there is something fundamentally correct about asking where our universe (or universes) comes from and why.

But there remains a feeling of purpose and control within our universe, which can only be the product of revelation. This revelation is, of course, in the realms of metaphysics.

Trigg doesn’t spell out in detail what metaphysical framework we might need. But he certainly suggests that scientists need a sense of humility. This goes for Christians too, as human brains have only a certain capacity for knowledge. We can both celebrate our God-given capacity to understand much about the universe, and wonder about those complexities at which science continues to hint.