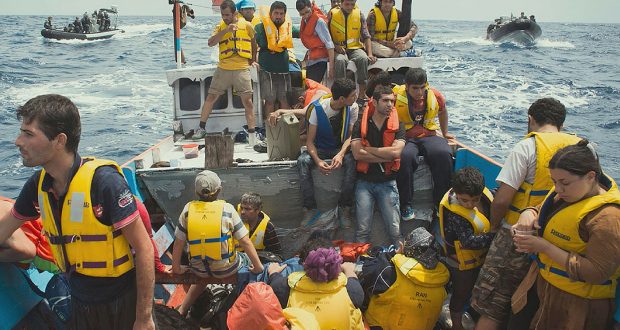 Chasing Asylum exposes the barbarity and secrecy surrounding the Australian Government’s asylum seeker policies, Sue Hutchinson gives her take on the controversial documentary which is destined to become one of the year’s most talked about films.

The federal government has demanded absolute secrecy around the offshore detention of so-called boat people, so Australians have had very little idea of what really happens. Until now.

Chasing Asylum is the kind of film that lingers long in the memory. I was fortunate to attend the sold-out Brisbane premiere with the film’s director Eva Orner in attendance. Despite the jam-packed theatre, a waiting list was in place in case of any no-shows. Such demand demonstrates the power of this film.

Eva spoke about why she made her film: “Living in the USA for much of the past decade, I watched with increasing sadness as the Australia I know and love was dragged into a climate of fear by successive governments determined to convince us of the dangers of boat people.”

This documentary cracks open the door so we can start to see what life is like for asylum seekers and refugees in Australia’s offshore detention centres, and also for those who are stuck indefinitely in Indonesia with no hope of being resettled in other countries, particularly Australia.

The film features current and former staff of the detention centres on Manus Island and Nauru who share their stories, how they came to be working there, their reactions to the work that was demanded of them and their horror at the damage being done to the individuals in their care.

Some of their identities are disguised; others bravely face the possibility of prosecution for speaking about their experiences.

There is real footage taken in secret within the centres and the conditions are indeed horrifying—the reality and constant threat of violence and sexual assault, mouldy tents, vile bathroom facilities, stones on the ground, no privacy.

This film forces us all to reflect on the actual experiences behind the ‘boat people’ label and what it says about our ‘lucky country’.

What impact does all this have on someone who tried to come to Australia, by the only means available to them, seeking a future safe from persecution, threat and harm in their country of origin? How can this be happening in Australia’s name?

Within the context of faith, we are challenged as we try to make sense of what is happening to these people, and our individual and collective complicity in the treatment. What does our faith say of this personal damage deliberately caused by our country?

“He has shown you, O mortal, what is good. And what does the Lord require of you? To act justly and to love mercy and to walk humbly with your God.” (Micah 6:8 NIV).

And what is mercy? God’s mercy is gracious, unmerited, and undeserved. It is linked to forgiveness and compassion; it is inexhaustible. As believers we have all received God’s loving mercy and we are to respond to others with the same mercy.

It seems to me that mercy is the opposite of what the asylum seekers and refugees experience. How should we respond to the plight of these desperate people?

I believe that every Australian aged 15 or over should see this documentary: we need to know what is happening in secret in our name.

Ultimately Chasing Asylum gives us unique insight into one of the most significant social justice issues of our day. We are challenged to say as individuals and together: “What difference can I make in this shameful situation?”

Look for a local screening online or host one for your community.