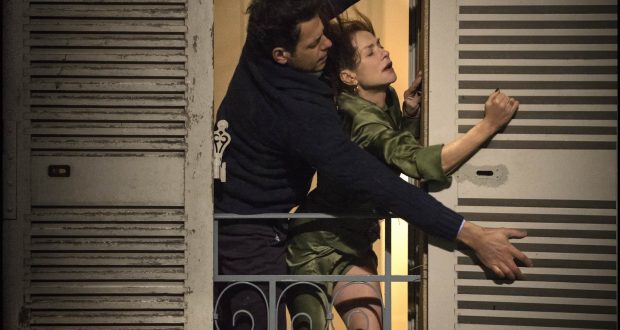 Paul Verhoeven has brought his fair share of risky (and often risqué) material to the big screen over the past four decades: think Starship Troopers, a fierce critique of US foreign policy masquerading as a sci-fi extravaganza, the garish spectacular Showgirls or the pulpy thriller Basic Instinct.

But his latest French-language drama Elle might just be his most controversial film yet and is bound to ignite debate, not just over the ambiguities nestled within its complex plot but how it presents and explores the psychopathology of its protagonist as sexual assault survivor.

The film opens on a brutal sexual assault and mainly concerns the aftermath of how a middle-aged woman Michele (French screen legend Isabelle Huppert, strikingly intense as ever) reacts to the crime whilst negotiating a network of turbulent relationships with friends, family and work colleagues.

It might vaguely seem to fit with a genre of thrillers concerned with rape-and-revenge trajectories but Elle hardly qualifies for the label of a “thriller” in the usual Hollywood sense.

For one, it’s darkly humorous throughout despite the subject matter, and credit must go to Verhoeven and screenwriter David Birke (from Philippe Djian’s novel) for masterfully subverting narrative expectations with jet-black laughs despite the huge risks such an approach poses in an age of increasingly sanitised filmmaking.

The other artful manoeuvre Verhoeven and Birke perform about two-thirds of the way through the film is to pivot the main plot from an absorbing whodunit surrounding the masked rapist to a chilling examination of the perverse dynamic between victim and perpetrator once he’s revealed.

Given the sheer ferocity and ugliness of the sexual assault, audiences might expect some kind of equally tough quest for justice but what delicately unfolds is a dangerous tango of lust and masochism, not in the Basic Instinct tradition but something closer to an acutely-rendered drama of danger and desire Shohei Imamura might have made if he had taken his Vengeance is Mine-style of cinema to contemporary Paris.

Huppert’s mercurial presence never shies away from capturing the venom and ruthlessness inherent in her character and yet we are left to contemplate whether her often vindictive behaviour is a direct by-product of her assault, her traumatic childhood, her present fractured family or maybe a combination of all three. Like her award-winning turn in Michael Haneke’s The Piano Teacher, Huppert excavates the dark side of the soul and sexual desires with a frankness that few top actresses would have the bravery to deliver.

For Christians who can stomach Elle’s occasional wallop of harrowing violence and explicit sexual content, there is much to consider as Christian iconography and characters feature prominently.

This should come as no particular surprise as Verhoeven has frequently drawn upon religious ideas and themes throughout his career: he has related his thriller The Fourth Man to his vision of religion, saw his sci-fi action movie RoboCop as a Christ allegory and was even planning to film his own Jesus biopic in the early 2000s (which has since been put on indefinite hold). It’s also worth mentioning that Verhoeven became the only non-theologian admitted into the Jesus Seminar, a distinguished group of scholars in theology, philosophy, linguistics and biblical history, in 1985. He may also be the only person in mainstream cinema to have written both a book on Christ (Jesus of Nazareth) and released a movie which earned a NC-17 rating (roughly the American equivalent of an Australian “R18+” rating) for nudity, sexual content and sexual violence.

So while his films may not exactly present themselves as traditional Christian entertainment, Verhoeven has a thorough engagement with Christianity and its thematic influence over the art of storytelling, and doesn’t hold back from injecting faith-inspired material in the most unlikely of films.

In one of Elle’s most poignant moments of grace (but startling in its implications), two women whose lives are both inexorably changed by the rapist, discuss faith, healing and inner-demons. It is impossible to ignore the statues from Christ’s nativity scene hovering in the background and the dialogue gives much to reflect upon given the context in which it is spoken.

It’s increasingly rare to find a film with the courage and commitment to embrace the complexity, messiness and chaos life can offer without opting for third act hackneyed resolutions and feel-good triumphs, but Elle is that kind of singular achievement that we rarely see in the cinemas (Sony Pictures wisely picked it up for an Australian theatrical release instead of dumping it straight to video-on-demand). While the film will not endear itself to some given its dark subject matter, this marks a scintillating return to cinema screens for Verhoeven a decade after his last feature Black Book. In short, a masterpiece.