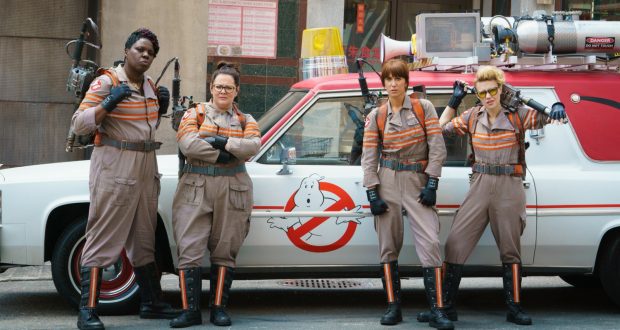 I didn’t think I’d have to write this review because I was so sure everybody else would. But with an extremely generous Rotten Tomatoes score of 73 per cent and Mediacritic rating of 60 per cent, it is clear many Ghostbusters (2016) reviewers have assessed this film purely on its political merit and without regard for its forgettable narrative, tacky cinematography and unintelligent jokes.

I wanted to like this film, I really did—and without giving you an incredibly personal and unconstructive critique reminiscent of Milo Yiannopoulos, let me explain why.

Director Paul Feig was strategically brilliant when he choose to cast the remake of Ghostbusters (1984) all-female. His decision predictably outraged men’s right activists who predictably spearheaded online campaigns to boycott the film while (predictably) gaining the pre-emptive support of feminists who rallied to fight ugly misogyny.

Thus without much work, he sparked hype about the film by tapping into cultural and political trends much more probably for financial than altruistic motives.

And it worked. Word bombs were thrown between the right and the left until at its opening weekend at the box office, Ghostbusters (2016) raked in USD $45 million worldwide—second only to school-holiday favourite The Secret Life of Pets (2016).

As positive reviews from my favourite media outlets flooded in, naturally I was intrigued. I ended up turning down Finding Dory (2016) in favour of watching two of my favourite comedic actresses (Melissa McCarthy and Kristen Wiig) bust them ghosts #girlpower. The regret still stings.

The film has all the ingredients of a comedic hit: brand recognition, nostalgia, a modern twist and an amazing cast; but completely fell flat in all other aspects, namely the script.

Australian Chris Hemsworth’s hot dumb-secretary routine is unbelievable and clumsy, the villain is one-dimensional—and glaringly male might I add—and the jokes are not clever enough to warrant more than a half-hearted laugh on behalf of my desperate attempt to like this film.

Ultimately the film is too long and not funny enough to do justice to the hype. Perhaps it’s only saving grace is its meta-nods to the “feminist agenda” for those in the know.

Ironically, while critics has given the film an above average review, audiences have been less kind. Most likely because they do not suffer the same pressures to be politically correct. God help you if you are a man who does not like this film.

So save your money and your time, advocate and appreciate the massive stride this film has made for womankind—then go see a film actually worth watching.