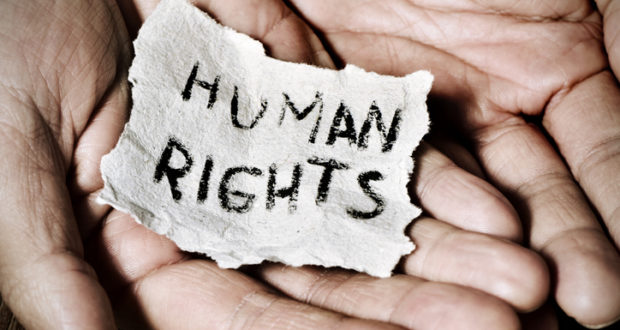 closeup of the hands of a young man with a piece of paper with the text human rights written in it, with a dramatic effect

Brisbane’s South Sudanese Faith Community, in collaboration with St David’s Uniting Church Coopers Plains and the South Moreton Presbytery, invite you to a prayer vigil this Saturday. In past months young South Sudanese people in Melbourne have been vilified by politicians and the press, making life difficult and stressful for the people in the South Sudanese community, the effects of which have reached Queensland.

All are welcome to stand in solidarity with this community on 8 December at 5 pm at St David’s Uniting Church, 68b Orange Grove Rd, Coopers Plains.

Stand up for human rights!

On the 70th anniversary of the Universal Declaration of Human Rights, 10 December, let’s stand up for equality, justice and human dignity. The universal declaration remains a milestone document that proclaims the inalienable rights to which everyone as a human being is inherently entitled—regardless of race, colour, religion, sex, language, political or other opinion, national or social origin, property, birth or other status.

The United Nations has a beautifully illustrated book laying out each of the 30 articles from the Universal Declaration of Human Rights in a simple and colourful manner. Each article and its illustration makes an effective display to introduce people to human rights. They are being displayed in the Uniting Church Centre in the lift. Check them out while you are visiting.

Uniting Church congregations are being asked to hold worship services on Sunday 20 January reflecting on and acknowledging the dispossession, violence towards and murder of Australia’s First Peoples. We lament the fact that Australia’s Second Peoples and we as a church were, and remain, complicit.

The Uniting Aboriginal and Islander Christian Congress asked the church, in the spirit of the covenant between us, to declare the Sunday before Australia Day as a Day of Mourning. This was endorsed by the 15th Assembly in July 2018, and 20 January will be the first official Day of Mourning. The event will become a fixture of the Uniting Church liturgical calendar.

Resources will be available soon on the Assembly website.

Open Minds is an agency operating around Queensland which provides mental health, disability and specialised supports.

If you love music, every Wednesday there is a music group open to the public at the Wynnum Bandstand, 55 Lower Esplanade Manly. Show your musical creativity—bring along an instrument if you have one, but you can still make music without one.

Another way of being human in the world

This International Day of Persons with Disability, Queensland Synod Research and Policy Officer Sue Hutchinson spoke with Eileen Glass of the L’Arche Community in Australia about life in L’Arche and the new movie being released in March 2019. Read the article in JourneyOnline.

Watch for the launch of the movie as this promises to be a life-changing experience.

It is with great sadness that we note the passing of Dr Mabo, a prominent advocate for the rights of First Nations people and Indigenous education. She will be remembered as a matriarch of reconciliation and native title, working alongside her husband Edward ‘Koiki’ Mabo for the recognition of Indigenous land rights in Australia.

A state funeral will take place this Thursday 6 December at 1 pm at Townsville Stadium, Annandale, Townsville. Relatives, friends, members of the Aboriginal, Torres Strait and Australian South Sea Islander communities and the general public are welcome.

Fear not, this Advent

This Advent series calls us beyond fear to embrace Christ’s good news of hope, joy, healing and peace this December. Common Grace has invited 25 Christians to share their reflections on how we can move beyond fear to become peacemakers in our world. Sign up here.

New data from Médecins Sans Frontières shows extremely high rates of suicidal ideation and suicide attempts on the island. Both Nauruan and refugee and asylum seeker patients showed similar levels of mental illness, far worse than other MSF projects around the world. Most Nauruans improved with the treatment provided. The refugees did not—they are in a perpetual state of despair—with their mental health actually declining during the 11 months MSF spent on Nauru.

For the first time, scientists have identified an association between rising temperatures caused by climate change and poor mental health, even suicides. The hotter the weather, the greater the impact. Find out more here.

Do you want to join in the work of the Uniting Church nationally? The Assembly Circles of Interest is a new platform for learning and sharing, contributing your ideas and connecting with others who are as passionate about things as you.

The seven circles encompass some of the core values of the Uniting Church and how we contribute to God’s mission in the world:

Join one, or more.

Our friends at Baptist World Aid are offering a series of emails to help us deal with the spike in materialism and sometimes even greed that comes with the Christmas season. They asked five contributors to reflect and share insights on the issue of consumption. Sign up to the email series.