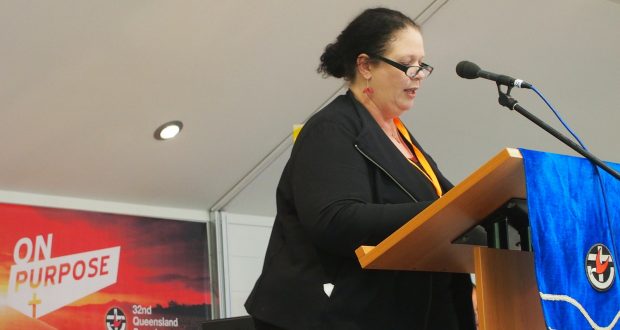 Colleen noted the centrality of the Assembly’s covenant with first peoples saying, “We are guests on occupied land”.

She reminded Synod members that last year’s 14th Assembly in Perth “committed to a conversation regarding sovereignty; what that means for us in practice and also the need to educate ourselves about the need for a treaty with our brothers and sisters.”

Colleen also detailed the Assembly’s recognition of the Armenian genocide.

“In Perth last year we formally recognised the Armenian genocide and resolved to write to the government in our country asking them to acknowledge the genocide. We’ve done this with varied responses.

“The importance of this … was brought home to me when I met the CEO of the Armenian Missionary Society of America last month and he told me, ‘When you hear our pain there is hope for the future’.”

An update was provided on the role chaplains play in the Australian Defence Force (ADF).

“Our defence force chaplains support members of the ADF in Australia and overseas. Rev Robyn Kidd is currently on deployment in the Middle East.

“While Rev Kidd has been deployed, she has been promoted to the rank of squadron leader in the Royal Australian Air Force (RAAF) in recognition of her leadership and ministry. Alongside Rev Kidd there are six other women serving in the RAAF. This is the biggest number of female chaplains of any denomination in the Australian Defence Force.”

Colleen spoke of the challenges currently facing the whole church including the response to the learnings and outcomes from the Royal Commission into Institutional Responses to Child Sexual Abuse.

“Please do not assume church safety is someone else’s responsibility,” she urged Synod members. “We must work together to create a robust, consistent culture of safety in our councils, in our churches, in our institutions.”

It was also noted that the church intends to “hold a space for grace” around the issue of marriage.

In terms of the future, Colleen quipped that when she quizzed Assembly senior leaders about whether there would be a church on Mars, they responded they did not think so but they thought the Uniting Church would be in partnership with one that was there.

In anticipation of the church’s 40th anniversary next year, Colleen said words such as “renewal”, “reimagining” and “transformation” were being floated.

The Assembly’s report was passed by consensus.