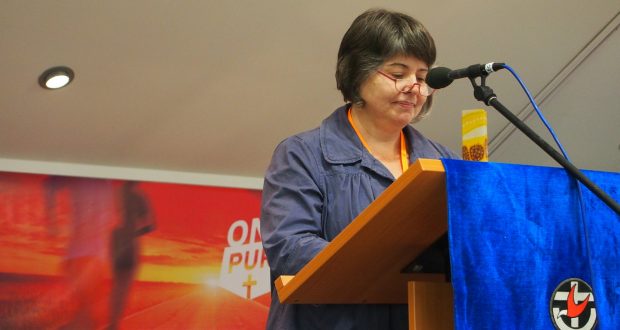 Members of the 32nd Synod have confidently called Rev Heather den Houting to be the next general secretary of the Queensland Synod.

“When we say the words ‘together on the way’, I want you to know I work best in the together space,” said Heather in response to her appointment.

An ordained Uniting Church minister, Heather has held a wide variety of roles across congregational, presbytery and Synod ministry. Heather also has qualifications in law and economics, management and education. Her work history is extensive and diverse. She has been a social responsibility advocate and international mission consultant for the Queensland Synod, congregational minister with Kenmore Uniting Church and director of mission for Blue Care.

Members of the 32nd Synod identified Heather as a “keeper” and “child of the church”. They had very few questions regarding her ability to succeed in the role and were convinced she understands the complexity and diversity of the Uniting Church.

All four members of the general secretary selection panel confidently addressed how Heather comprehensively met all eight points of the selection criteria.

Moderator Rev David Baker said, “Heather has demonstrated a deep passion and love for this church and knows and loves it well. She appreciates both the polity and theology of the Uniting Church.”

Cooperoo and Norman Park minister Rev Linda Hanson identified Heather as confident, inclusive and an active listener who has integrity. “She has the gifts and graces required for this role,” said Linda.

In responding to the Synod on her appointment, Heather reminded those present that the Synod now needs an associate general secretary.

A minute of appreciation was received by acclamation for Robert Packer, who stepped in as general secretary of the Queensland Synod in December last year.