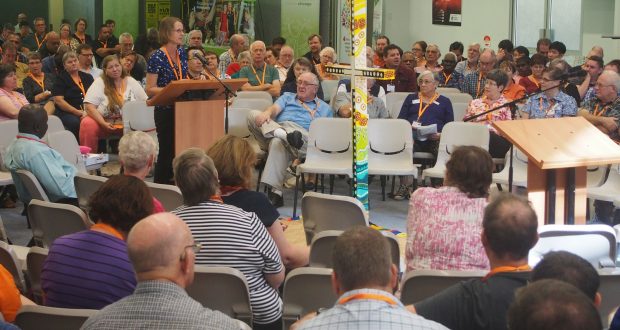 After fervent discussion the 32nd Synod has passed by consensus revised priority directions for 2016–2020.

Brought forward by Rev Andrew Gunton on behalf the facilitation team, the original wording of the proposal was amended to reflect the concerns of 32nd Synod members.

The originally discerned top five priorities of 32nd Synod members were to “adopt as its priority directions for 2016–2020”: to be Christ-centred, at prayer and listening; discipleship; leadership; connected with communities; and youth, children and families.

Consensus was not reached and numerous members expressed their concerns which included: issues with the word “adopt” which suggested a top down enforcement as opposed to a recommendation; lack of qualitative and quantitative data to discern how we have travelled with priority directions in the past; an extension on the directions to 2030; the absence of words such a “spirituality”, “growth” and “winning souls for Christ”; the absence of the sentiment accompanying the phrase “as the church grows, transitions and innovates”; and both the wording being too vague or not vague enough.

She addressed concern around the idea we are spending too much time setting directions and not enough time enacting it by reminding members the “crowd is different” at each Synod in Session and that “part of the story of the journey of Christ is that we tell and retell our story”.

“We do this not because things are staying the same but because we embrace these [priorities] every time we come together,” said Heather.

Former moderator Rev Kaye Ronalds of the Downs Presbytery told the Synod that this strategic plan was important to pin down as it “gives us authority, permission and direction” in the way we expend resources.

Rev Linda Hanson was among many who spoke passionately for the inclusion of the word “growth”.

“The church is quite comfortable declining, but if we put words like growth in there it makes us accountable for what we are not doing. That’s why we as a Synod don’t want the word ‘growth’ up there because we might actually have to do it,” said Linda.

Consensus was passed to include: Rev Peter Armstrong’s words “as the church grows, transitions and innovates”; acknowledge these priorities as part of our journey Together on the way, enriching community; and change the word “connected” to “connecting” as nothing in the Uniting Church in finite or finished.

The statement passed by consensus reads as follows:

That the Synod, as part of its journey of Together on the way, enriching communities:

as the church grows, transitions and innovates.

The full priority directions including points b, c, d and e were also passed by consensus and will be made available through Uniting News 24 May 2016.