Home > Agency News > Candidate numbers on the rise at Trinity 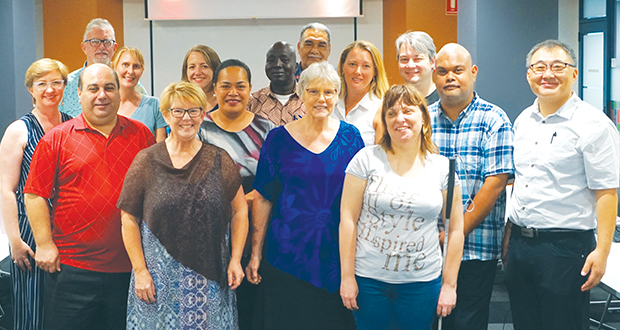 Some of the new formation candidates at Trinity College Queensland. Photo: Elly Waite

Candidate numbers on the rise at Trinity

This year Trinity College Queensland has 20 candidates in the second phase of formation for ordained ministry in the Uniting Church in Australia. Dianne Jensen reports.

There’s a buzz of conversation at morning tea at Trinity College Queensland, Brisbane on the first day of a formation course for candidates for ordained ministry in the Uniting Church.

It’s the start of a new year, and in a sign of the continuing growth in student numbers across the board at Trinity there are now 20 candidates in the second phase of formation. Eight new people started in first semester 2020 and there will be another intake later this year.

“One of the simple realities is that the standards set by Assembly were changed in 2016.”

Nigel says that the revised requirements have enabled more flexible options at Trinity, and better integration between the Period of Discernment (the first phase of formation) and the next step towards ordained ministry.

“It’s a fixed and a flexible approach,” he says. “We are a broad church that consists of many different ethnic backgrounds and cultures and so we need to be mindful of the fact that not everyone fits the one mould. We obviously have to stay within the standards that the Assembly sets, but have enough of a flexible approach to be able to say to students—this is how we can potentially make this work.”

The new candidates represent men and women from different cultural backgrounds and at different life stages.

Their ministry will take place in a quickly changing society, and Nigel says that their formation must reflect contemporary reality.

“We are way more on the edge now, and when people think about going into ministry in a congregation or chaplaincy setting or whatever the context, there’s a lot more demand to know the reason why you are doing what you are doing.”

Society has shifted but people are still people, he adds, with a deep desire to be able to know the more meaningful things of life beyond work, money and lifestyle.

Moses has been involved in leadership in the South Sudanese community through the Coopers Plains Uniting Church since his arrival in Australia in 2003.

He was encouraged to undertake a Period of Discernment and then to candidate for ordained ministry.

“The Uniting Church has given me the chance to study. Now I start here. It’s amazing! Praise the Lord!”

Anthony Kim was a civil engineer until serious health problems changed the direction of his life.

“I turned in my journey to follow God, and in the course of doing that I met so many people who were sick and hurting and burdened and sorrowed, from different nations, so I would like to follow the pathway to look after them.”