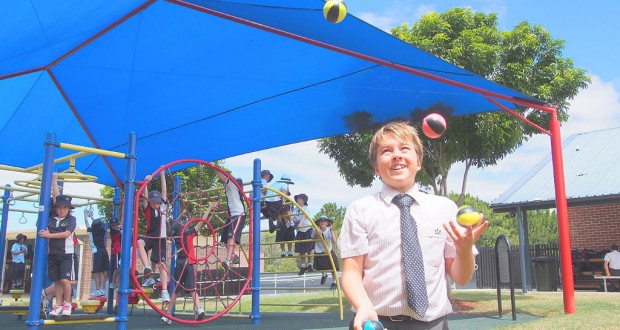 Redcliffe Uniting Church’s Conor Kikkert can juggle in one hand while solving a Rubik’s Cube in the other; but it’s not this talent alone that has garnered him national media attention.  Ashley Thompson writes.

You may have been surprised last November to find Conor, a conscientious and unassuming 12-year-old, busking at the Redcliffe markets and outside his school, The Lakes College to raise money for UnitingWorld’s water filtration projects in Zimbabwe.

Machetes, fire batons, rings and regular old juggling balls —Conor’s unique juggling habits have stopped the heart of his mum and national media alike, seeing him featured in The North Lakes Times, on Seven News and even national news-current affairs show The Project.

It was his altruistic intentions that made him stand out from a crowd of YouTubers with similar skills.

“I think everyone can make a difference in their own way,” says Conor, “I had been busking for myself before and I guess I wanted to give some away.”

“With everyone else’s help and the website I raised around $3400.”

Originally a religious education (RE) project centred on the biblical theme “Faith without deeds is dead”, Conor knew what he wanted to do after learning infant mortality statistics in science class regarding water-related sicknesses. Water.org says that a child dies every 10 seconds due to such diseases.

“Because of Conor’s efforts, that threat will be vastly reduced for the families of Muzarabani, Zimbabwe,” says UnitingWorld spokeswoman Cath Taylor.

“For the first time they can safely drink water that won’t put them at risk of serious illness like cholera, typhoid and diarrhoea. That’s a huge burden to have lifted!”

According to Cath, “Muzarabani is one of the driest parts of Zimbabwe and Conor’s efforts mean the building of deep wells with winches, buckets and lids so that they’re not contaminated by animal droppings or other nasties”.

“Kids like Conor give everyone a huge buzz,” she says.

“We’re reminded that this is a generation who are connected and compassionate, willing to take on the vast challenges of the world with the kind of creativity we desperately need.”

“It’s not charity,” Cath explains. “It’s not sending them something from our own culture we think they might need.  It’s sharing something valuable of ourselves so they’ll have the resources to build something truly valuable for themselves—long term.”