Home > Agency News > Life, death and the birth that changes everything 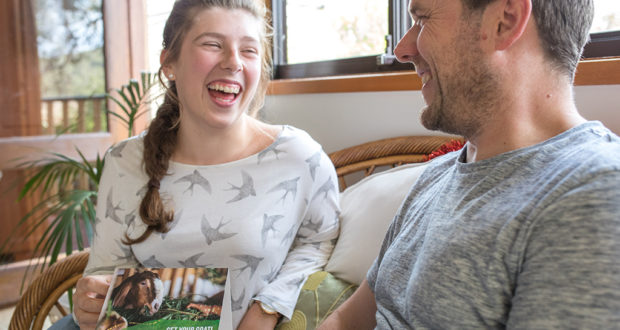 Jemima and Doug Taylor exchange gifts from Everything in Common. “Get your goat”– it will kickstart a family business and allow families to buy medicine or send their kids to school. Photo: Supplied

For millions around the world the Christmas season brings no respite from a range of preventable risks such as dirty water or malaria. UnitingWorld’s Cath Taylor reflects on the Christmas story, personal tragedy and how we can bring hope to those abroad who are disadvantaged.

I remember the birth of my first child: three-and-a-half hours in the final stage, head stuck at the S bend while my husband and the obstetrician camped under my leg and discussed tactical rugby moves.

And then that warm, heavy body on mine, perfect fingers and toes and eyes and hair. We loved her, loved her more than anything that had ever been before. It was impossible that the world could produce such a miracle.

Our second child died eight hours after he entered that same world. His lungs tried and failed. At our fingertips, every medical intervention known to mankind—a helicopter on standby, a wealth of privileged dollars of study poured into medical uniforms and blinking lights and drugs and knowledge. Death came regardless.

There was comfort in knowing no stone had gone unturned in attempting to save Hugh’s life. But for so many other children around the world, that simply isn’t the case. Eight hundred children die every day—one every two minutes—of complications related to dirty water. Totally preventable. Three thousand die from malaria: also preventable. That’s a heart stopper.

What would it feel like, as a mum or dad, to watch your child die simply because you couldn’t afford their medicine? Because you could only give them dirty water to drink? Because the world, which has enough, did not share?

As we held Hugh in the hours before he died, hand-pumping oxygen into his lungs, I told him, “Love is stronger than death.”

It was a quiet anthem; the idea that we will continue to give, that death is not the end. It’s what I believe, in spite of all the evidence to the contrary. It’s what local churches everywhere believe as they look around and push back against darkness, greed and injustice—providing clean water, food supplements for babies with HIV, homework support, training for advocates against domestic violence.

For us, this is a response to the birth of another child, 2000 years ago in a forgotten backwater ruled by an empire beating its chest and shouting that power is everything. Quietly, love began its quest. The poor were given a place at the table; hungry people were fed; a small group of followers lived together and held their possessions in common, sharing what they had so that no one would be in need.

They’re the inspiration for UnitingWorld’s ethical gift catalogue Everything in Common where you’ll find gifts that support projects of the global local church, from chickens that kickstart small businesses to theological scholarships for women leaders.

Not every death is vanquished—not immediately. But if the life of Jesus means anything, it means that ultimately love wins. After Hugh’s death, we gave birth to another child. With our two daughters, this year we’ll celebrate Christmas by giving life-changing gifts to others. I hope you’ll join us. A joyful Christmas to you, from all of us at UnitingWorld.

Tagged with: christmas DECEMBER2017 Everything in Common unitingworld