Home > Culture > Book review: God is Good for You 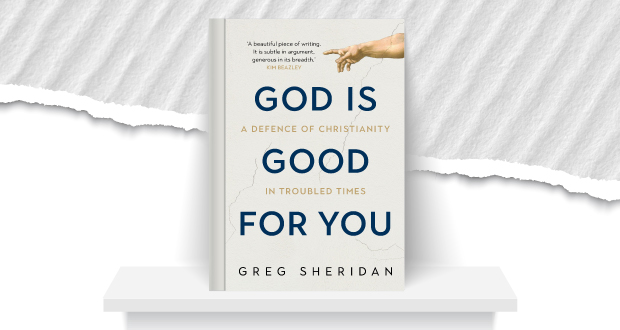 While Christianity seems to be on the decline in Australian society, there’s no denying its influence in politics with numerous prime ministers (Scott Morrison, John Howard, Kevin Rudd and Tony Abbott for starters) and other politicians belonging to the faith. Notable Australian journalist Greg Sheridan tackles the subject in his latest book God is Good for You which probes the religious lives of many Australian politicians and how this influences their work. Nick Mattiske reviews.

Political journalist Greg Sheridan, with this much-publicised book, has aimed to somewhat remedy this by explaining Christian faith, in particular its [as he says] more extraordinary claims. He also, more uniquely, lets us in on the faith lives of Australian politicians, and the influence these have—or don’t have—on their policies.

He argues that the freedoms we value in the west have a basis in Christianity, and that Christianity is personally good for you, citing higher levels of income and lower incidences of divorce amongst believers (but Sheridan omits Jesus’ warnings that we should reject possessions and family ties for his sake). He also suggests that despite the propaganda of the anti-religious, Christianity is rational. Or at least not irrational, he says, back-pedalling ever so slightly.

Sheridan roams widely in doctrine, but his portrait of Christianity in general is sometimes a portrait of his own—Catholic and conservative—brand of Christianity, replete with heaven, hell, judgement, miracles, angels and demons—elements fairly widely but not universally accepted. Many of Sheridan’s claims are contestable, from his statement that Christians believe Mary was without sin (an exclusively Catholic doctrine with no scriptural basis) to his description of Planetshakers’ music as “top notch”. His philosophical and theological opinions are overwhelmingly informed by conservative writers. He approvingly quotes Rod Dreher’s The Benedict Option, wherein Dreher advocates pulling up the church’s drawbridge.

When it comes to politics, Sheridan relays the old clanger that politics and faith operate separately, itself a (conservative) political and theological opinion, due to his widely shared misreading of Jesus’ injunction to render to Caesar what is Caesar’s, which supposedly proves Jesus’ own apolitical views. Sheridan writes that Jesus taught “supernatural truths”, a claim that is typically used in politics to tell religious meddlers to stop questioning the inequitable status quo and that jars with the early church’s favouring of social justice over supernaturalism, not to mention the acts of Christian activists and reformers across the ages, from William Wilberforce to Daniel Berrigan.

Sheridan does get pollies from across the political spectrum to sing from the same song sheet. Both Tony Abbott and Penny Wong, in their own ways, separate faith and politics. Wong argues for politics as a more fact-based activity and faith as more tied to emotion. Abbott apparently works behind the scenes visiting the sick, but it is sometimes hard to square this quiet care with his love of pugilistic politics. For John Howard, Christianity, and its culture of care for the vulnerable, seems to be simply part of civilised life, though his admiration for anti-slavery campaigner Wilberforce sits oddly with his reticence on Indigenous reconciliation. The theologically informed Kevin Rudd, on the other hand, describes how his faith informs his politics, which he, typically, describes as “the fair go”, rather than survival-of-the-fittest.

Sheridan notes that politicians have higher levels of religious adherence than the general population, a fact that generally goes unreported, perhaps because behaviour doesn’t always match professed ideals, and perhaps because journalists tend to be more irreligious (Sheridan is an exception as a journalist and believer). Many, including Peter Khalil, say that faith provides purpose in life, oriented towards improving the common good, whereas atheism entails a certain aimlessness. No wonder, despite the supposed incompatibility of faith and politics, that people of faith are drawn to political work.