Home > Opinion > Reflections on the Word of God 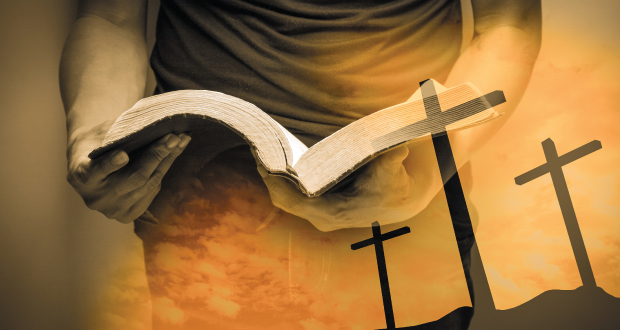 When difficult theological issues arise we often go to the Scriptures to genuinely and diligently search for answers. Yet, some people object, saying: “The Bible is not the Word of God, Jesus is! Just look to Jesus, not the Bible.” These folks reckon that such an appeal to Jesus as the Word of God instead of the Bible as the Word of God allows them to escape the tricky problem of biblical interpretation.

In some ways, I understand the pushback. Divine violence, marriage and human sexuality, and the relationship of the Old Testament to the New Testament—these are tough topics that require complex and lengthy engagements with scripture. And, one thing is for certain, they are not solved by the simplistic appeal: “The Bible says it, I believe it, that settles it!” The Bible requires interpretation. Surely though, everyone at least agrees that we need to appeal to the Bible in some way in order to do theology, right? Well, many have answered, “No, we just need Jesus.”

In a recent dialogue a person asked (and I’m paraphrasing), “Why can’t we just follow Jesus’ teaching to love God and neighbour?”, rather than have to deal with the Bible? After all, he said, “We know the Bible is full of errors and contradictions.”

I asked him “Where would you find out about this loving Jesus?” He responded with gusto, “The Sermon on the Mount!”

We can’t put aside the Bible to get to Jesus, because every reliable thing we know about Jesus we get from the Bible. While it is inconsistent, the belief, however, is not uncommon. In an effort to isolate Jesus as the only authoritative source for theology from the rest of the Bible, an appeal is made to the Bible—the very source that the person is seeking to minimise, ignore, avoid, or even undermine!

We have no access to the incarnate Word, Jesus, except through the Spirit-inspired apostolic testimony about him in the Word of God written. Without the Bible, we would have a Christ without any content. Is Jesus the Word of God, or is Scripture the Word of God? It is not an either/or; it is a both/and. Jesus is the ultimate divine self-disclosure of God. He is the Word of God. Yet, in addition to Jesus, the church has always held that the Bible is the Spirit-inspired authoritative Word of God-written. And, contrary to what some would have you think, there is not a competition in scripture between the authoritative “red-letters” of Jesus and the teachings of St Paul and the other apostles. Jesus does not need to “rescue us” from St Paul by correcting all of the “erroneous” things that the apostle taught about him.

Thus, a principle such as love for neighbour—which is itself a concept derived from the teachings of Jesus in the New Testament—should not be used to overturn, reinterpret, or neutralise the ethical and theological teachings of the rest of New Testament. The universal church has always held to the divine inspiration of scripture as a whole—and not only to the inspiration of Jesus’ teachings. On the basis of this divine inspiration the New Testament exhibits a complex theological coherence rather than a contradictory theological competition. Jesus is the interpretive key through which we read the scriptures; he is not the eraser through which we escape and eliminate the difficult components of the apostolic faith transmitted by the authors that he himself inspired by his spirit.

Some have argued that since Paragraph 5 of the Basis of Union says that we “hear the Word of God” in the Bible, the Uniting Church must hold that Jesus alone is the Word of God, and not the rest of scripture. Yet, that claim is highly problematic. The chief crafter of the Basis of Union, Davis McCaughey wrote that “the Word” refers to “the Biblical words—or at least the dominant Biblical images, the scriptural words which have revelatory power” (see assembly.uca.org.au/images/DocByte_ReadingTheScriptures.pdf).

Outside of the Basis, the Bible itself claims that it is divinely-inspired and authoritative. In 2 Timothy 3:16 the author states that, “All scripture is breathed out by God and profitable for teaching, for reproof, for correction, and for training in righteousness,” while 2 Peter 1:21 says that the prophets “spoke from God as they were carried along by the Holy Spirit”. Peter even refers to Paul’s letters as “scripture” in 2 Peter 3:15–16.

Following in the footsteps of the apostles were early church theologians: Origen, Basil, Jerome, Tertullian, Chrysostom, and Augustine. They too held that the scriptures—and not Jesus only—were Spirit-inspired and authoritative. Throughout history, the top-tier theologians from every Christian denomination have continued to assert that the entire Bible is verbally inspired by the Holy Spirit and the Word of God written. Among these luminaries belong: Thomas Aquinas, Martin Luther, John Calvin, John Wesley, the Westminster Confession of Faith, the Roman Catholic Church, the Orthodox Church, and the vast majority of Anglicans across the world.

I affirm with all of these sources that Jesus is the Word incarnate and that the Holy Scriptures are the Spirit-inspired Word of God written. We do not represent the fundamentalist fringe; we are the catholic consensus. The next time someone says “I’ll take Jesus, but not the Bible” remind them that it is not an either/or, it is a both/and. Both Jesus himself and the Bible are the authoritative sources for theology and faithful discipleship. Scripture as the Word is not a competitor to Jesus the Word; it is, to paraphrase Luther, the crib in which Christ the Word comes to us. And as the Council of Orange so beautifully stated, “ignorance of the scriptures is ignorance of Christ.”

The Uniting Church came into being by asking the questions, “What is the faith of the church? Where is it to be found?” A generation on, we need to be asking these questions again and discovering what the answers are today.

The relationship between the Word of God—Jesus Christ—and the words of scripture is central to any answer. John has rightly set out that you cannot split these two neatly apart without setting yourself adrift from the historic faith and from the source through which Jesus is revealed as God’s Word. If all Bibles in the world disappeared in a puff of smoke, what we would lose would be more than the multiple stories of Jesus and his teachings. We would lose the imprint of God’s saving acts through and often despite the actions of God’s people throughout history. It is the rich, divergent, and sometimes problematic testimony in scripture to the God whose loving kindness persists throughout all circumstances that gives us the context to understand Jesus. So a false binary between Jesus and scripture is too simplistic.

Are people really saying, “I’ll take Jesus, but not the Bible”? If they are, perhaps they mean, “I will interpret the Bible through the lens of Jesus’ life, his teaching, his death and resurrection”. I would agree with that! As “the ultimate divine self-disclosure of God”, Jesus shapes how we read and interpret scripture.

I think there is a distinction between Jesus Christ as the Word of God, and the Bible, which according to the Basis of Union Paragraph 5 is “unique, prophetic and apostolic testimony” to the Word of God. Calling the Bible the Word of God (written) is shorthand for this profoundly connected yet distinct relationship. Those who framed the Basis of Union embedded the subtle distinction between the source of authority, namely the God who is fully and finally revealed in Jesus Christ, and the more proximate source through which that authority comes to us, namely scripture, appropriated in the witnessing and worshipping life of the church.

The Bible sitting on the bookshelf gathering dust is not the full reality of God’s Word; the Bible read, preached and guiding God’s people is the place where God’s Word is active. I don’t mind shorthand. But it’s good to be reminded that the mysterious Word of God who was in the beginning with God, and through whom all things, indeed life itself, came into being (John 1:1-4), is not coterminous with the book, sacred though that book is. Of course, without the book we wouldn’t know that!

We live in an era when all authorities are subject to question and critique. Multiple lenses, multiple truth claims are standard in western thinking. As Christians, we breathe the same air as our neighbours and participate in the same cultural discourse. Nevertheless, our faith challenges us to think more deeply about the authority of scripture. If the Bible is indeed unique, as the Basis of Union says, then the grace that meets us as we read it and find ourselves shaped by it is not an optional extra or found in equal measure somewhere else. Similarly, if the Bible is prophetic and apostolic, the story of God’s prophets and apostles is our story too, which we are called to be shaped by and to shape for our time and context. And if the Bible is testimony, bearing witness to God’s revelation in the past and enabling further revelation in the present, we need it. All of it.

Ordinary Christians prior to the Reformation did live out lives of faith and obedience without direct access to scripture, but we are blessed to have access to the sources. Who would want to ditch the sources and simply rely on second-hand information?

As an Old Testament scholar, let me remind people, first of all, that the whole of the Bible, including the Old Testament, bears witness to God’s revelation. I don’t want that to be forgotten in this discussion … but now to my response.

Both John and Vicky agree that it is not an either/or between Jesus and the Bible. Both are important and formative. Where they differ in setting out how they understand the relationship between Jesus and the Bible is in emphasis. Both understand and accept Jesus as the Word of God, as God made flesh. For John, that Word is present in scripture, hence his emphasis on the Word of God in written form. Jesus is revealed in scripture, made known to us as we read, or hear, or encounter the written word. While I think John would stop short of saying that we can only know Jesus through scripture, the Bible itself is authoritative, is central to the revelation of God: “This is the Word of the Lord.”

Vicky also understands the Bible as central to our faith, but emphasises that Christ is made known through scripture. Scripture witnesses to Jesus, and when the Bible is read, proclaimed, preached, God’s grace and revelation is made present. The Bible witnesses to God and to the salvation of God through Christ, but without being the same as the Word of God. The Bible is sacred, and is one of the sources of our faith. Scripture has a unique position in our faith as a means of revealing God’s grace; “In this is the Word of God.”

So it’s not either/or Bible and Jesus, but both/and. How we understand the both/and, however, can differ.