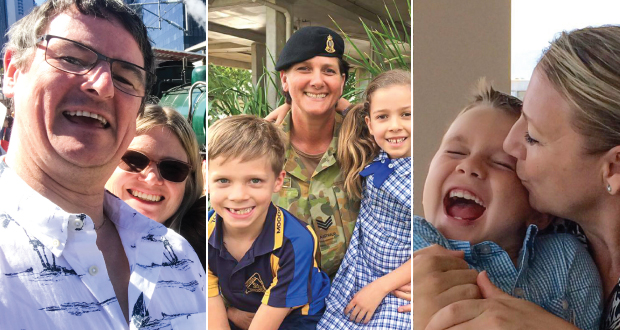 I come from humble beginnings and grew up in Johannesburg. My awareness of Jesus’ love for me led me to become a Christian when I was 16-years-old through a confirmation course in the Methodist Church in South Africa.

This gave me a solid foundation in Christianity, but my time at Holy Trinity Brompton Church in London exposed me to some of the purest and deepest experiences of God. I completed an Alpha Course with Nicky Gumbel and witnessed avowed atheists convert to Christianity.

I immigrated to Australia about 15 years ago and went through a divorce some years later. God used my pain as a catalyst to enter ministry; first leading a women’s ministry and thereafter fulfilling the role of a youth and children’s worker.

In my early thirties I began training groups in recruitment skills, and I started my own company after travelling the world on and off for about ten years after high school.

At different times of my life I have sensed a call to ministry, but the timing never felt right—or I was running away like Jonah!

I finally came to a point of surrender after spending two weeks searching for office space to grow my business. When every door closed, I met with my minister for guidance. He suggested that perhaps I was being led out of business and into full-time ministry.

I have just completed my Bachelor of Theology and formation studies to become an ordained Minister of the Word through Trinity College Queensland. My studies have been invaluable and I will always treasure the knowledge, inspiration and practical guidance I received through their world-class lecturers.

I accepted a call to Living Faith Uniting Church in Carina Heights and began ministry in February 2019.

My beautiful young son Ethan brings tremendous joy to my life. When I have time, I love restoring old furniture, visiting new places and creative writing.

I have done some amateur acting, and dream of pulling together a team of thespians to put on a Christian theatrical performance.

Originally from Belfast in Northern Ireland, my faith was grounded firmly in the Presbyterian Church.

When I moved to Australia (Latrobe Valley, Victoria) with my family in 1980 I looked for a new spiritual home and quickly found the Uniting Church.

I discovered that Australia was a different place to the bombs and bullets I was brought up with.

I moved to Queensland in 2003, and was fortunate enough to marry the most wonderful lady in the world, Tracey. We have been blessed with five children ranging in age from nine to 24.
After completing my first degree in Business externally, study was so much a part of my life that I started to study with Coolamon College. I walked away from the study feeling that it was not for me, but God had other ideas.

After attending a Walk to Emmaus in 2011 I was challenged to finish off my lay preaching.

Shortly after being commissioned as a lay preacher, Rev Peter Armstrong asked me to consider a Period of Discernment which led me to Trinity College.

During my time at Trinity I was blessed to have some amazing mentors.

Through their mentorship I have been equipped with a better understanding of myself through tools like theological reflection, the Bible—and more importantly, how important and relevant Christianity is in our modern world.

I look forward to the next few years in my first placement at Faith Works Uniting Community. We will journey together, exploring God’s word and how it both liberates and challenges us.
To use the words attributed to St Francis: “We should preach the gospel of our Lord Jesus Christ at all times, and if necessary, use words.”

I come from an Italian background and grew up on a sugar cane farm in North Queensland, the eldest of six sisters. I am married to Doug and we have nine-year-old twins, Lachlan and Abby, and I have two older children Chris and Jess and a grandson Luca.

Raised in the Roman Catholic tradition I have been a Christian all my life, but committed my life to Jesus in 1998 at Calvary Assembly of God (AOG), Townsville.

I have been in the Army for 23 years, both part-time and full-time, and was training to be an AOG pastor when I felt called into Army chaplaincy.

It has been a long journey, and often the doors seemed closed. In 2012 I met Army Chaplain Rev Charles Vesely at a Military Character Leadership Course. He was to become my supervisor and mentor five years later when I was awarded an Army In-Service Training Scheme scholarship to become an Army chaplain.

I completed a Bachelor of Ministry at Trinity College Queensland last year and will be ordained as a deacon in the Uniting Church in Australia in March. I have been called to Ipswich City Uniting Church to gain experience working in a congregation before I return to the Army and continue my training and placement as an Army chaplain.

I am really looking forward to getting to know the congregation and learning all things to do with the life of the Uniting Church, especially as the combined churches of Ipswich work together in the Ipswich community.

I am very thankful to the Trinity faculty for all their help. Having a Jewish heritage, I was fascinated to explore the Hebrew roots to our Christian faith and I would encourage people to read the first part of the Bible; it is amazing to see Yeshua’s handprints throughout the entire Bible.

Depending on where God leads, I will remain in the military or return to the civilian world. I am looking forward to continuing to learn as I embark on the next phase of my training to become a fully formed minister of the Uniting Church.