Home > Culture > The art of preaching without words 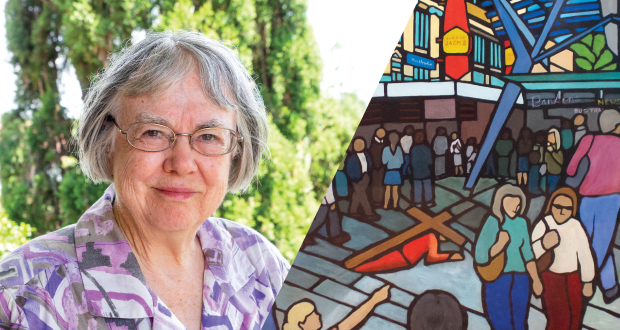 Jesus Falls by Geraldine Wheeler was painted for a Visionaries’ Contemporary Stations of the Cross exhibition in St John’s Cathedral, 2008. Photo: Rod Buchholz

This issue introduces the new Journey Q & A focusing on Uniting Church artists and photographers. Meet Queensland artist and Uniting Church minister (retired) Rev Dr Geraldine Wheeler BA, BD, MTh, MEd, PhD; one of the founders of the ecumenical artist group Visionaries which celebrates the twentieth anniversary of its first exhibition in 2019. Geraldine has maintained an art practice for most of her life, along with a passion for liturgy and worship.

I began a project to study the feminine in the Bible while in West Mackay and the Pioneer Valley, and started picturing biblical women, sometimes in an Australian setting.
This led to other series on biblical themes and making designs for the liturgical year, combining the colours of Australian flora with the seasonal liturgical colours. Women skilled in patchwork worked with me on this when I was minister in the Nambour congregation. When ministering at the Merthyr Road Uniting Church, together with artists in the congregation, we formed Visionaries.

What is your medium of choice?

For the work I now do, my primary medium is gouache stencil painting on black stonehenge paper. I began the picturing biblical women series doing linocut printing and hand colouring. I had always found the stencil prints of the Japanese Christian artist Sadao Watanabe, used widely across the world church, to be meaningful. Then I learned how the Australian artist Margaret Preston had adapted a stencilling technique to paint on black paper (a less complicated style than that of Watanabe). I experimented with this and for nearly three decades most of my work has been gouache stencil painting.

What are your major themes?

I understand much of my art to be complementary to the preaching of the word. The first series was picturing biblical women, then there were creation themes, St Francis’ The Canticle of the Creatures, Lent, Easter, Pentecost, Advent and Christmas themes, Psalms and wisdom themes, and work related to a combined project of a contemporary interpretation of the Stations of the Cross.

What do you consider your most significant art work?

For some people, The Canticle of the Creatures series is helpful for spiritual reflection and prayer. Different women have related to one or more of the series picturing biblical women, while the Psalms series offers others a quiet prayerful place.

The picture in the Stations of the Cross series, Jesus falls, which is set in the Queen Street Mall in Brisbane, has provided some with much food for thought about the place of Jesus in modern life in this city. It has a companion piece picturing a choir singing Christmas carols in the mall, titled O come, O come, Emmanuel.

See some of Geraldine’s artwork at visionaries.org.au