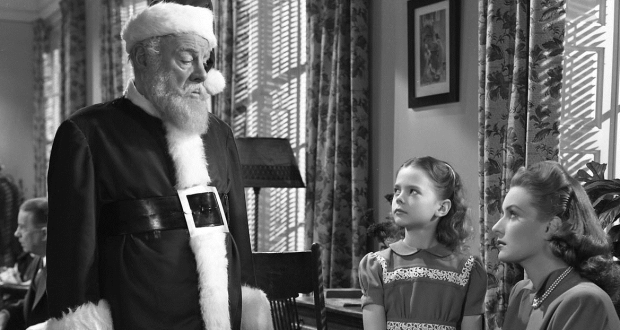 “Aren’t we forgetting the true meaning of Christmas? You know, the birth of Santa,” asks Bart Simpson.

We wince, and wonder if this is how the post- Christian world really sees us. Have Santa and Jesus coalesced into a single mythical character of indeterminate age and girth, a miracle worker who is great with kids?

There is no denying that the nativity story has been incorporated into the cult of Santa, and milked for inspirational concepts and appealing images of angels, stars and babies. It makes for great family viewing, and our Christmas favourites include films such as Miracle on 34th Street (1947), Love Actually and Elf (2003).

We all love stories about redemption, reconciliation and resurrection. The average viewer might not recognise the theological concepts but the salutary tale of Dickens’ curmudgeonly Scrooge is relished by successive generations, from A Christmas Carol (1938, 1951), Scrooged (1988), The Muppet Christmas Carol (1992) to How the Grinch Stole Christmas (2000).

Is it a case of crass cultural theft, or is imitation the sincerest form of flattery?

Consider Santa Claus himself. Since the original St Nicholas inspired the Victorians to create the jolly gift-giver, Santa has evolved into a character best personified by Tim Allen in The Santa Clause (1994). Like any contemporary hero he has become a sensitive creature, confronting evil and exercising courage and sacrifice in order to prevail. Has Santa become more like Jesus, and less like a hypocritical Victorian who sentimentalises childhood but ignores child exploitation?

ABC broadcaster Rachel Kohn told religion journalists at a symposium in Brisbane last October that “people fear being disconnected from spiritual life, even if they are not practising”. Other commentators have noted that the numbers of people attending Christmas services is increasing, especially in cathedrals.

Believer or non-believer, we all long for peace on Earth and goodwill to all. We want the lost to be found, families to be reunited, and that which is broken to be restored.

The nativity story is our cultural lens through which we understand the nature of God and his relationship with humankind. Surely the message of grace and redemption transcends our attempts to confine and define how it is delivered.

As the Grinch says, “Blast this Christmas music. It’s joyful and triumphant”.