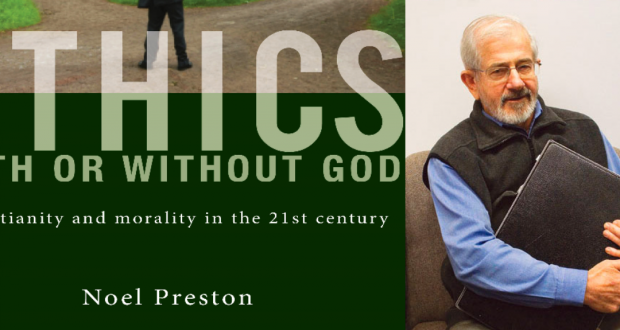 Ethics With or Without God: Christianity and morality in the 21st century. Noel Preston. Mosaic Press 2014. RRP $22.95.

When I was younger, making ethical decisions seemed a fairly straightforward process. As a Christian I had the Bible and centuries of Christian tradition to draw on when it came to making wise ethical choices—all pretty black and white and all pretty easy to understand.

Now I am older things seem much greyer. As a practising Christian and in the minority in an increasingly pluralistic and secular culture, making ethical decisions is a much more complex process.

This is the challenge that Noel Preston addresses in his new book Ethics With or Without God: Christianity and morality in the 21st century.

As Preston says, “The twenty-first century is probably the first century in the human era in which a significant proportion of humanity confronts ethical choices without the reference points traditional religion has provided.”

As a Uniting Church Minister and academic who has researched and taught applied ethics in universities, Preston comes to the question of ethics as one for whom the Jesus story is central, albeit from the more progressive end of the Christian spectrum.

Like many of us searching for a common language that Christians and other people of faith might share with secular society when it comes to ethics,

Preston recognises that religious faith still has much to contribute to questions of social and eco-justice but doesn’t own the territory.

He doesn’t dodge the centrality of faith but neither will he let us off the hook on ethical responsibility by acquiescence to simplistic dogma. There is no place in Preston’s ethic for doctrinaire use of scriptural injunctives. Rather, the search for ethical integrity is enlightened by the community and person-centred ethic modelled by Jesus.

Throughout the book Preston seeks to cultivate a shared, secular-sacred ethic and devotes his attention to how faith and non-religious people together might develop an eco-spirituality for all humanity.

Preston concludes that compassion is the fundamental virtue which underpins ethical integrity and will be the key to the shared creation of a just economy and a peaceful global community.

Peppered with personal recollections, wisdom and stories, this book doesn’t shirk the ethical challenges in the potentially controversial subjects of love, sex, politics and the development of responsible ecological and global principles. You may not always agree with Preston but it’s a challenge worth pursuing.