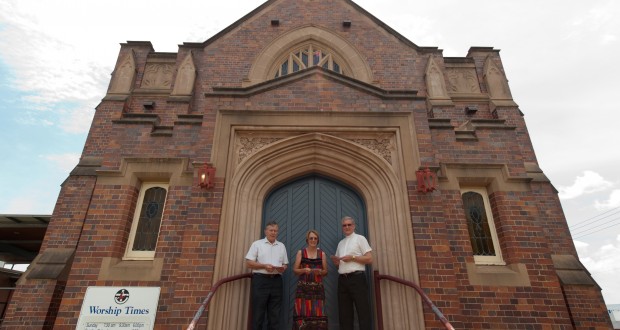 Bundaberg Uniting Church was inundated by flood water in early 2013 but is now refurbished and an active worshiping community once more. Photo: Right Image Photography.

Building on a strong foundation

The image of the 77-year-old Bundaberg Uniting Church awash with 60 cm of putrid water was a symbol for many of the devastation wrought by the January floods. It was the end of September before the congregation gathered in the refurbished church for worship, writes Dianne Jensen.

The damage to the Bundaberg church property was extensive. As well as flooding the church, water washed through McNaught Hall and the Stirling Centre, and the storage shed was swamped. Kitchen facilities were lost, including the commercial facilities used at Andy’s Place to provide meals for the disadvantaged.

Aided by support from churches and individuals near and far, the congregation got stuck into the clean-up. The church office was moved into the home of Rev Ray Nutley and his wife, and the hall was cleaned out and set up for worship. Andy’s Place community meals outreach was up and running on a reduced basis only a few weeks after the flood.

Even under the trying circumstances, ministries such as Sunday school, Crossroads disability outreach, Boys’ Brigade, and Coffee on the Deck continued to function, some in a modified form.

As the rebuilding got underway, the congregation took the opportunity to repair the chronically leaking roof and install cabling in waterproof material. All electrical and data points are 1.2 m above the floor.

Church Council secretary Frank Millett says that it was truly amazing that despite all church property going under, services and other aspects of church life continued.

“The church here has a good record of serving the community and has continued to do so. We are key players in providing food at annual events such as Agrotrend and the local show. Another outreach is the day camp week for children, this year attracting over 100 participants. We introduced Messy Church in April, and a successful ladies’ breakfast was held near Mother’s Day where over 80 attended.”

Many church members were themselves affected, including Heather Donald from north Bundaberg. In spite of the fact that her house had been built to withstand the record 1942 floods, the water quickly rose and she and her husband took shelter with a neighbour. Both families found themselves stranded when the front steps collapsed after a freezer smashed into the house.

Rescue came when some young men arrived with a boat and braved the chest-high waters to carry her and her neighbours to safety.

With almost 70 cm of water through it, her house walls had to be completely stripped. Mrs Donald and her husband spent 20 weeks living with their daughter, moving back home at the end of June. She is grateful for the kindness and generosity of so many, including the gift of a quilt from a church craft group.

Also gone is a good chunk of her neighbourhood, with three houses demolished in the immediate vicinity while others are vacant, still waiting to be renovated.

“I suppose we’ve come to terms with it, but the first couple of months were strange,” says Mrs Donald. “At the school crossing there are still only half the number of children there.”

Like most people, she will join family at Christmas time. “It’s important to be together. You know how precious they are.”