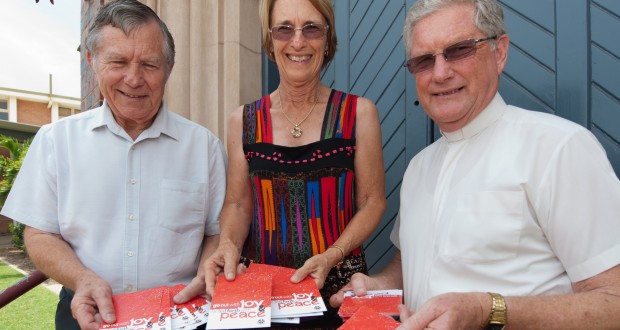 Bundaberg: the advent of hope

As Bundaberg Uniting Church members begin the familiar Advent journey, many will reflect on a year of working and waiting for a new beginning. Dianne Jensen reports.

The people of Bundaberg and the nearby towns in the Wide Bay Burnett region had their lives turned upside down by the floods caused by cyclone Oswald last January. An estimated 9000 houses as well as businesses, farming properties and community facilities were affected.

When the mud army had been and gone, it was left to the battered community to begin the long process of recovery.

Local churches working together as the Combined Churches of Bundaberg played a key role in what followed, delivering a wide range of services and earning the Christian community a new voice in the rebuilding of the city.

The initial church response was the coordinated delivery of 10 000 donated Woolworths hampers in early March.

Church Council secretary Frank Millett, whose own house was flooded, was one of the Uniting Church team which delivered hundreds of hampers in the central city and east Bundaberg.

He remembers the elderly man sitting in his flood-damaged room at a rental retirement villa.

When asked why he had come back before repairs were made, the man replied “Where else can I go?”

Rev Ray Nutley describes the work of the churches as “absolutely brilliant”, as they quickly utilised their networks to respond to the crisis. In the aftermath, they worked together to support those who fell through the cracks in the system.

The school chaplaincy service provided by the Combined Churches was a critical element, he says, as chaplains used established relationships in schools to connect with dislocated students and their families. The chaplains provided food vouchers, school supplies and uniforms as well as a sympathetic ear.

“The evacuations created a bit of difficulty for the children at school, and some had to move school,” says Mr Nutley. “One of the other difficulties is that people moved in with family and friends thinking that it was only going to be short term. So there’s a lot of tension.”

As the first anniversary of the disaster approaches, it is clear that many people will not be back in their homes by Christmas, if at all, he adds. The most vulnerable such as the elderly and low-income families with mortgages are still in dire straits.

The Combined Churches of Bundaberg and the Salvation Army have responded to the need by forming a Community Rebuild Group, using volunteers and donated materials to help people return houses to a safe and habitable standard.

They are also developing a chaplaincy program to provide ongoing community support and to work with local groups.

The Bundaberg Ministers’ Association, of which Mr Nutley is chairperson, has set up a service to help people struggling to deal with the bureaucracy of banks, insurance companies and government agencies.

Mr Nutley agrees that the high visibility of the churches has provided new opportunities to have a say in civic life.

“We have a voice that we struggled to have before. We now have church representatives on the groups involved with flood recovery and future planning.”

As Christmas comes, the Ministers’ Association and the Combined Churches are gearing up for ways to help the community through the tough times that lie ahead.

Bundaberg Uniting Church, like other congregations who have lived through heartbreak, will do the things that it has always done at Christmas. The traditional decorations may have been lost, but there will be celebrations by church groups, projects to raise money for the disadvantaged, and music and worship in the restored church.

“In lots of ways this has been a life-changing experience and the opportunity for new life to begin,” says Mr Nutley. “This Christmas time we’ll talk about joy and hope—because the Christian faith is about hope, even in amongst all the troubles. And we will all pray.”